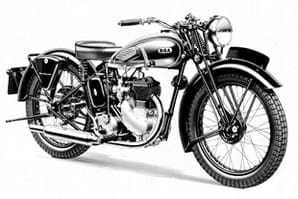 Bearing in mind the B31 BSA was made from 1945 to 1959, and the B33 from 1946 to 1960, large numbers of them are still in use judging from the number one sees in classic motorcycle events. Although they were never intended to match the sparkling performance of their illustrious and more expensive counterparts, the B32 and B34 Gold Stars, their attributes were many.

Not only did they represent very good value for money, had the ability to provide long, reliable service with a minimum of maintenance, and possessed a quite acceptable performance, but also they handled well and were very economic to run. When BSA announced their new model programme during August 1945 it was claimed the first batch of models for sale to the civilian market had already passed through Small Heath's assembly line. So the B31 was one of the first of several new models to appear on the post war market.

In January 1946 the B32 competition variant followed. Very similar to the B31, it differed in having chromium plated mudguards, an upswept exhaust pipe and silencer, gear ratios more appropriate for its off-road use and a 21" diameter front wheel and 19" rear wheel, shod with Dunlop Trials Universal tyres. 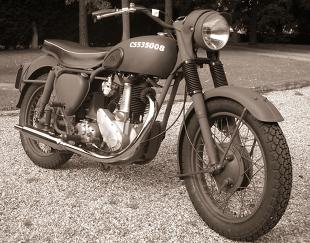 For better off road traction, the rear wheel was fitted with a 4.00 section tyre retained by a security bolt. That same month the B33 model made its debut, a 499cc version of the B31 with an enlarged 85x88mm bore and stroke engine. Any subsequent modification made to the B31 also applied to the B33. A 499cc B34 competition model was inevitable, and that followed just three months later.

The origins of the new B series models can be found in the 1937 Silver Star range designed by Val Page. The arrangement of the timing gear and the shape of the timing cover provide ample evidence of his earlier involvement with Triumph's single cylinder models, made during the mid 30s. Other famous names had a hand in the B series design too. A revised version of the Silver Star, designated the B29, would have gone into production during 1940 had it not been for the war. Recoded B30 it was then destined for use by the armed forces, that is until the army changed their order in favour of the M20 side valve model. Employed by BSA for a short spell during the war, Joe Craig had been involved with the B30s development, and later Edward Turner. It was the latter who re-designed the cylinder head, to replace the hairpin valve springs originally specified by those of the more conventional coil spring type.

As soon as it was possible to resume the manufacture of motorcycles after World War 2, BSA had a ready-made model to fit in well with the existing M series of side valve models. The B30 was recoded yet again as the B31, its 71x88mm overhead valve engine destined to set a new standard in both robustness and reliability. Priced at £108.1s.6d, this latest addition to BSAs range reflected good value for money, bearing in mind that £22.1s.6d of that sum represented the iniquitous Purchase Tax that then applied. Unlike the early post war models of a few other manufacturers, BSAs B31 had the advantage of starting life with a telescopic front fork of the company's own design and manufacture and a distinctive feature than continued until the 1949 model year. The speedometer was mounted in the top right hand side of the petrol tank, with a long attachment to its trip so that it could be re-set from the underside of the tank. The design was conventional in other respects with a single down tube frame that carried the engine and its separate four speed gearbox in engine plates. Snail cam chain adjusters ensured correct rear wheel alignment. 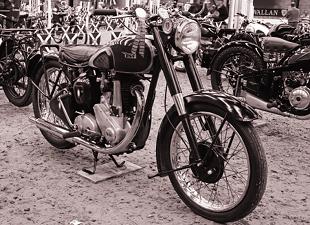 Initially, only a rigid frame model was available, and even that was destined for export rather than for sale to the home market. However, as the export restrictions began to ease a little, a plunger rear suspension model became available on payment of an additional £11.10s, inclusive of tax. A dual seat was available too, as an optional extra.

Although the B31 showed up well in road tests conducted by the motorcycling press of the day, its gearbox was not quite as satisfactory as it might be. Gear changes were not always clean and positive, and the clutch showed a tendency to drag unless special care was taken when setting it up. The gearbox design was changed after engine number ZB31 6032 and several other shortcomings made good at the same time. In the later gearbox the kickstarter return spring was no longer contained within the main shell, making it easier to change, and the speedometer drive was now taken from the top right hand side of the inner cover where it was much more accessible. Although the clutch remained unaltered, an accessory manufacturer had the foresight to offer an interchangeable clutch centre which would permit the a Triumph clutch assembly to be fitted. About this time, the rigid frame was modified in minor respects to simplify its production.

In 1949 the two competition models began to break away from the broad specification that applied to the B31 and B33 roadsters. B32 purchasers were given the option of an aluminium alloy cylinder head and barrel, and the following year this applied also to the B34. They still retained the separate push rod tube however, so that the engine differed externally from the Gold Star design. It is surprising to find these models continued in production as late as 1957, bearing in mind their competition role had been taken over by their Gold Star counterparts.

The use of the all alloy engine has often confused many, giving the impression that a competition model thus fitted is a Gold Star. The unscrupulous often enhanced this impression by incorporating the letters GS in the engine number! Unfortunately, not even the use of a two part push rod cover can be regarded as a reliable guide as the later engines used a Gold Star top end on a B31 or B33 crankcase, to add to the confusion. The only sure check is the factory service records or someone who really knows his single cylinder BSAs.

Not noticeable externally on the later 499cc engines was the shortening of the connecting rod by a half inch and the use of a split skirt piston. This took place in 1953 but did not bring about a change in the stroke of the engine, which remained 88mm. The height of the gudgeon pin in the new piston was lowered by a similar amount, to compensate.

A significant change came about in 1954 when a more satisfactory frame with pivoted fork rear suspension was introduced. Of welded construction the new frame was of the duplex tubular cradle type, similar to that used on the latest Gold Star models. The petrol tank was now secured by a centre bolt recessed into its top and blanked off by a rubber plug. To harmonise production, the Gold Star type of gearbox was substituted for the revised design that had seen several years service. Unfortunately, continuing export demand meant that at first most of the new pivoted fork models went overseas, even though they were listed in the UK with this frame as an option, on payment of an extra £12. A dual seat had now become a standard fitment, as did a headlamp cowl, and later in the year, a steering head lock. A modification that applied to the B33 model only was the use of an 8" diameter front brake. The models with plunger rear suspension remained in production until the end of the 1955 model year, by which time the rigid frame models had been dropped from the catalogue. In 1955 the pivoted fork frame was specified as standard for all the roadsters and a year later, the competition models.

Improvements to the 1956 models included full width hubs, with a central cast in iron alloy brake drum, and a quickly detachable rear wheel which left the final drive chain and sprocket in position. It proved especially useful when the optional full enclosure rear chaincase was fitted (£3.2s extra). Another improvement was a valanced front mudguard with a black panel on each side for the registration number. Optional extras included an air filter (15s.6d extra) and a prop stand (18s.8d). Unfortunately, recent model changes added considerably to the overall weight of the B series models. The B31 now weighed 4101bs and the B33 4211bs, a significant increase that had a noticeable effect on performance and in particular, acceleration.

The next significant change to occur was in 1958, when the faithful Lucas magdyno was replaced by a crankshaft-driven alternator and coil ignition. This meant the shock absorber previously on the end of the crankshaft had to be relocated and its design changed so that it formed part of the clutch centre. A combined contact breaker and advance/retard mechanism occupied the place from which the magdyno would have taken its drive. These changes in the electrical system necessitated different wiring, a re-arrangement of the headlamp cowl, and the incorporation of a rectifier into the electrical system for recharging the battery. By the late 1950s it was becoming apparent that the days of the separate engine and gearbox were numbered and that unit construction was the trend that new designs would follow in the immediate future. After a run of 15 years the B31 and the B33 finally disappeared from the BSA catalogue. The B31 went first, in September 1959, and the B33 in July 1960. Many mourned their passing.