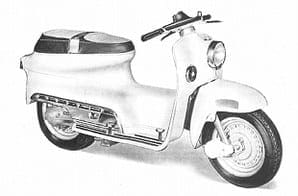 It is widely believed today that the scooter is an Italian invention, whereas in actual fact nothing is further from the truth. The idea originated in this country well before the 1914-18 war and it is interesting to note that Douglas were one of the first to make a single cylinder engine especially for such a use. The idea never caught on, largely because many of the designs had no seat. The rider was expected to stand throughout the entire journey, which suggested it was likely to be of only short duration. It was not until the early 1950s that the scooter as we know it today became all the vogue. Its styling had a wide appeal and it attracted many to take to two wheels who would not otherwise have considered purchasing a conventional motorcycle. Ironically the scooter had made the breakthrough into the 'everyman' market which conventional motorcycle manufacturers had been striving unsuccessfully to achieve for a good many years.

Greatest impact
Lambretta and Vespa made the greatest impact and dominated the market throughout the ten-year boom in scooter sales. In this country, Vespa were first on the scene when they made their debut at the 1949 Motor Cycle Show. Claude McCormack of Douglas had seen their potential and a licensing agreement was arranged with Piaggio whereby they were being made in the Douglas works at Kingswood, Bristol by March 1951. Sadly the remainder of the larger British motorcycle manufacturers remained cautious and held back. To quote but one example, Donald Heather of Associated Motor Cycles Limited saw the scooter as nothing more than a passing fad. When eventually manufacture of a James scooter was sanctioned, the boom was all but over and the resultant deficit only added to AMC's eventual downfall. 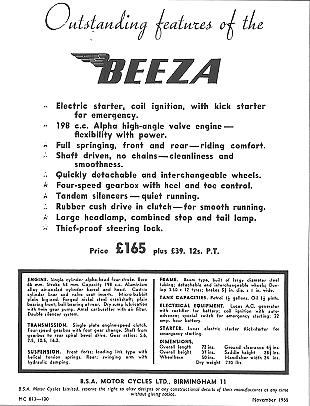 By 1955 the mighty BSA Group decided they could hold back no longer and at that year's Motor Cycle Show had a very attractive and advanced design on display. The 198cc Beeza had arrived, which simply bristled with new ideas. For a start, it had a single cylinder side valve engine and gearbox unit mounted horizontally and a car-type self-starter. With a bore and stroke dimension of 66 x 58mm, the shortstroke engine had its valves activated by rockers rather than cam followers to reduce both noise and cost. Located horizontally, it had its light alloy cylinder head and barrel located at right angles to the main crankcase casting, resembling a horizontally-opposed twin without its offside cylinder. Having a squish cylinder head, it was built unit with a four-speed gearbox which it drove via a car-type single plate clutch. Gear changing was made easy by the adoption of heel and toe operation on the offside running board. As in conventional car practice, a toothed ring around the periphery of the clutch was engaged by the starter motor—a considerable advance over the Siba type of self-starter used on some other scooters. A kickstarter was available for emergency starting even though the Lucas AC generator system had its own emergency start facility. Silencers in tandem ensured quiet running.

The main crankcase extended rearwards behind the gearbox to fully enclose a shaft that drove the rear wheel stub axle bevel gears. The complete assembly pivoted to act as the rear swinging fork, its movement controlled by an hydraulically-damped single spring. At the front end, also hydraulically damped, was a leading link fork. Both wheels were of disc type, shod with Dunlop 3.50 x 12 tyres. They were quickly detachable and interchangeable and fitted with 5½" diameter brakes.

Fully enclosed engine unit
The stylish bodywork followed conventional scooter practice, with a front apron and a fully-enclosed engine unit. It comprised a series of pressings attached to light gauge tubing, some of which were quickly detachable to provide access to the engine and transmission assembly. This, and the extensive use of light alloy in the construction of the engine/gear unit, kept the Beeza's weight down to 2701bs. The price was attractive too, £204.12s all-in (£165 plus £39.12 Purchase Tax). Rumour had it that an automatic transmission version was also likely to be offered in the foreseeable future, but this never materialised.

The Beeza, in its pale blue finish and on a revolving turntable, took pride of place at one end of BSA's stand at the show. It was counterbalanced at the other end by another new model, the 70cc Dandy best described as a cross between a scooter and a moped. BSA had indeed pulled out all the stops to gain a foothold in both the scooter and the moped markets which by then were heading towards their respective peaks.

Anyone who placed an order for a Beeza (and there were many) would have been disappointed as it never went into production and vanished almost as rapidly as it had appeared.

Just why this came about is unknown, although in his book Whatever happened to the British motorcycle industry Bert Hopwood claims a decision had been made to rush it into production with virtually no development engineering time being spent on it. It is alleged its performance was well under par bearing in mind it had only a side valve engine. It has also been suggested that there was the possibility of patent infringement with another design. Whatever the reason, it was only the Dandy that went into production and even this suffered a number of irritating problems that seemed to linger on throughout its relatively short production span. However, in this latter case cost cutting was largely responsible, especially the substitution of a cast iron cylinder barrel and head for the alloy originals.

The disappearance of the Beeza did not mark the end of BSA's involvement with the scooter market. They re-entered again in 1958, this time under the Sunbeam name that was owned by the BSA Group. Three models were offered, one with a 173cc single cylinder engine and two with an OHV two cylinder engine, one of which had an electric starter and 12 volt electrics. They were, however, merely differently badged scooters of Triumph origin that reflected the merger of Meriden and Small Heath interests which had occurred way back in 1951.