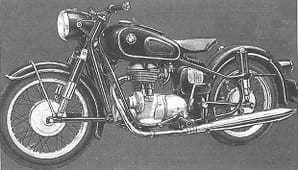 If you are ever offered a 'veteran' BMW you will know it's a fake because BMW wasn't founded until August 1918. Their earlier origins  lay in the manufacture of six-cylinder inline engines for the German airforce, one of which was used by the legendary fighter pilot Baron Manfred von Richthofen. However, after the war, the terms of the Treaty of Versailles meant they could no longer make aircraft engines and had instead to seek other outlets. After a brief excursion into what is best termed general engineering, ranging from making castings to office furniture and agricultural machinery, during 1920 they had diversified still further, into the manufacture of motorcycle engines.

Their initial design was a single cylinder two-stroke unit of 146cc capacity, bearing the name, Flink, but when this failed to make much impression they became more ambitious in their outlook. The next project was a complete motorcycle, based on the Douglas horizontally-opposed twin. Countless numbers of the latter had been used by the British army during the 1914-18 war, and it had been the machine most favoured by the despatch riders that used them under active service conditions. Marketed under the name Helios, the German-made version owed much allegiance to its British counterpart, having its engine mounted lengthwise in the frame, with belt final drive to the rear wheel. 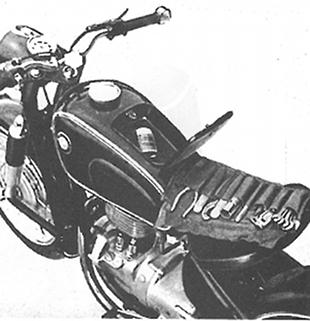 Max Friz, a young designer involved with the early aircraft engines, felt sure BMW could do better by designing an even better engine. Granville Bradshaw's ABC had its horizontally-opposed twin engine unit turned through 90 degrees, so that the cylinders projected into the cooling airstream. So, in 1922, the next BMW twin cylinder engine was designed for mounting in similar fashion. A 500cc side valve, it was supplied initially to Victoria, the Nuernbergbased motorcycle manufacturer. It was the first engine to carry the now familiar BMW badge, and it encouraged Friz to design a complete machine around it.

In 1923 the first complete motorcycle to be sold under the BMW name appeared, the legendary R32, which was to establish a broad pattern the company follows even to this present day. Not only was the engine mounted transversely in the frame, but it also followed car practice by having it built in unit with the gearbox and shaft final drive.

Lower end of market
Most manufacturers had at least one cheaper model in their range, to cater for the lower end of the market, so BMW needed to follow suit. The result was the introduction, in 1925, of the R39 single cylinder model. It was claimed to be the first of its kind to have its overhead valve mechanism fully enclosed. It also had the crankcase and cylinder barrel cast in unison; a sleeve for the latter being pressed in during assembly. It wasn't particularly cheap in relation to the price of the twin and less than 1000 were sold in two years, but after a gap from 1927 to 1931, a single cylinder model remained in the BMW range for many years. Capacities varied according to the model, from 198cc to 398cc. 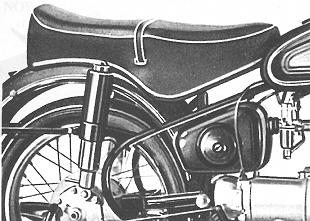 World War II had brought production of motorcycles for the civilian market to an end, and it wasn't until 1948 that BMW was permitted again to make motorcycles for this market – provided, initially, that their engine capacity didn't exceed 250cc. This led to the emergence of the R24 in 1949 and, a year later, the R25 which featured for the first time a 4-speed gearbox and plunger type rear suspension. It was to be 1955 however, before the singles took on a really stylish appearance, with the launch of the 245cc R26. With an Earles-type front fork, pivoted fork rear suspension and light alloy wheel rims with full-width hubs, the single cylinder model had now become as attractive in appearance as its twin cylinder counterparts, in the traditional all black finish, relieved by white lining around mudguards and petrol tank. It produced 15bhp and was heavy; weighing 346lbs. 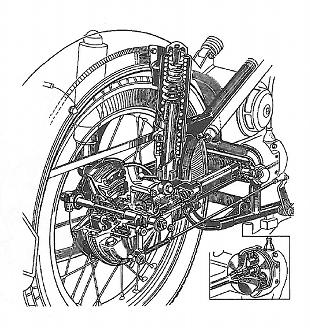 The BMW twin engines were renowned for their almost complete lack of vibration, due to their horizontally-opposed cylinder layout. Although the singles hadn't proved particularly troublesome in this respect either, it was decided to do something about them too. When the 245cc R27 model emerged in 1960, it was similar in many respects to its predecessor, apart from having new rubber engine mountings. Now, the engine unit was located in the duplex tube frame on four inclined rubber 'snubbers' (like those of the 57/S8 Sunbeam twins), with a further 'snubber' at the cylinder head steady, and adjustable 'snubbers' at the front end of the crankshaft housing and at the gearbox. These, in conjunction with the typical Continental-type spring pillar saddle, Earles front fork and hydraulically-damped rear suspension units, isolated the rider from both engine vibration and normal road shocks. The overall weight of the machine was now up to 357 lbs, but with power output up too; at 18bhp.

Earlier models
Other useful features, some of which had carried over from the earlier models, included a toolbox that formed an integral part ofthe petrol tank top, a built-in air cleaner, and flashing indicators mounted in the handlebar ends. It was still an expensive machine though, compared with other 250s. In the U.K. it retailed at £330.6s.7d (030.33), at a time when a C15 BSA was more than £100 cheaper; not that the two models bore close comparison! 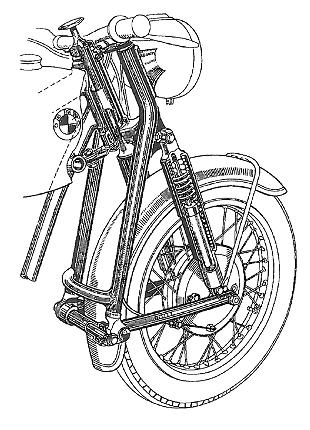 An earlier single cylinder model, the R35 of 342cc capacity, had been reincarnated soon after the war. One of the pre-war BMW factories was in Eisenach, Thueringen, which had become part of East Germany. The works were taken over by V.E.B., Eisenach Motoren Werke, who re-manufactured the 1937-40 R35 to virtually the original design, complete with pressed steel frame and plunger rear suspension. It was sold as an EMW from 1947-52, the most readily distinguishing feature being the petrol tank badge. Whereas the characteristic BMW badge has alternate blue and white segments within a circle, those of the EMW were red and white. As the blue and white quarters are a throwback the company's years of aircraft engine manufacture – a pilot's view of the sky through a two bladed propellor, one wonders how the EMW variation can be interpreted!

Although the R27 was their last single to date, BMW intend to re-enter this sector of the market at this year's NEC International Motor Cycle Show, with the F650 Swinging-arm rear suspension 'Funduro' It features a 4-valve Rotax engine of Austrian with shaft drive within the offside manufacture, weighing 417 lbs in road trim and will be the first ever BMW to have chain final drive!