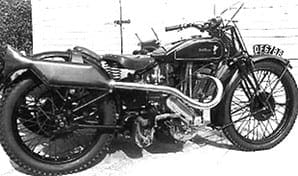 In the days when the British motorcycle industry was at its peak each individual manufacturer was constantly striving to come up with some startling development that would give them the edge over their competitors. Although it might have done so for only a relatively short period before the rest caught up, the immediate benefit came in the form of a marked increase in the number of machines sold. One of the best known examples is Zenith's famous Gradua gear. When it first appeared it gave their machines a tremendous advantage in hill climbs. So much so that any of their models fitted with this gear were banned by a sizeable number of clubs from entering the single gear class in the events they organised.

Much later even Veloce Limited must have been staggered by their success in the 1926 Junior TT. Not only did Alec Bennett score a convincing victory over Jimmy Simpson, the runner up, but also he finished little short of 11 minutes ahead of Simpson's AJS, an incredible performance that not even the factory personnel could have expected.

Outstanding performance
For good measure he also put up the fastest lap at 68.75mph and Veloce Limited were awarded the Team Prize! So many orders for their new ohc models came flooding in after such an outstanding performance that they had to move to much larger premises in York Road, Hall Green, their final home.

Later still, Norton with its famous featherbed frame, conceived by Rex McCandless, ensured their Manx Norton singles continued to offer a real threat to the Italian multis. It provided such an improvement in road holding that they remained in contention longer than they would have done had they persevered with their pre war 'garden gate' plunger frame design. The arrival of the new frame coincided nicely with Geoff Duke's appointment to the team of 'works' riders. 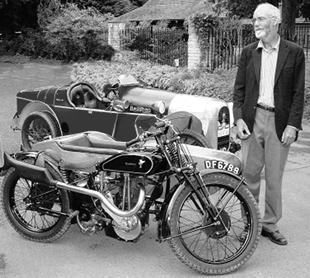 So much so for the better known manufacturers. But what of the much smaller companies, many of whom also made good quality reliable machines, albeit in comparatively small numbers? Here it is much more difficult to find similar examples of such enterprise, but one exception is that of Baughan Motors, a small engineering company located in Stroud, Gloucestershire.

The company had its premises in Lower Street, Stroud and was formed in 1920 by H.P (Harry) Baughan whose objective was to make cyclecars. During the period immediately before and just after the 1914-18 war much interest was shown in cyclecars, a somewhat primitive and frail four wheel vehicle. Based on a motorcycle engine and gearbox they had the advantage of providing cheap and economical transport for carrying two persons with just a modicum of comfort. Fulfiling in many respects the same purpose as the post-World War 2 bubblecar, the cyclecar was also short lived. As a result Baughan Motors diversified into the manufacture of motorcycles.

They decided to specialise in making competition models, especially those suitable for use in trials. Apart from being a good engineer, Harry Baughan was also a trials rider and could put to good effect much of what he had learnt from first hand experience in these events. Production was limited, as may be expected from the small work force employed, but there was no doubt about the quality of the product, as soon became evident.

Anyone familiar with the Stroud area will know of its steep ascents and descents, as well as its abundance of glutinous mud – the ideal ingredients for plotting a trials course! Harry had shown an interest in sidecar wheel drive for some time and could see how it would have a particular advantage in this type of going. His Works Manager, W.E. (Bill) Hayward was also a trials rider and with this in mind they set to in late 1928 to build a sidecar wheel drive outfit for Bill to use in competition events. It was completed in time for Bill to give it its first outing on home ground in the 1929 Cotswold Cups Trial. Initially it was fitted with a launch type sidecar reminiscent of those more usually seen on the road, but later it was replaced by the more conventional trials 'chair' when it became apparent it was very competitive.

50 machines were made
It is alleged that during the period 1923-1936 something like 50 machines were made, intended mostly for use in trials, scrambles and motorcycle football events, but with a few for strictly touring purposes. Seven different models were available, ranging from 250cc to 500cc capacity and including the 500cc sidecar wheel drive outfit. There was a choice of engines too, either a Blackburne or a Sturmey Archer, and the option of either a side valve or an overhead valve design.

At least one machine is known to have been supplied with a Python engine of Rudge manufacture, but this was probably made to special order. It was one of two machines supplied to Ted Morris of Harrogate who was one of several to achieve some measure of success with this marque. 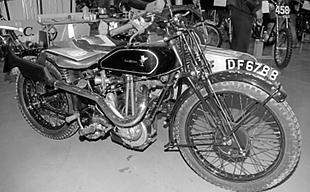 Bill Hayward seemed to be the most successful of the Baughan sidecar drivers. He won the Wiltshire Cup in the 1931 Kickham Trial with his sidecar wheel drive outfit and put up the Best Performance in the 1933 event with no marks lost. To win the trial outright and collect the Kickham Memorial Trophy was a considerable achievement, especially as on this occasion the course proved particularly difficult after heavy rain. He also won the first sidecar class awards to be presented in the Cotswold Cups Trial (a performance which he repeated in 1935 to win the Cotswold Sidecar Cup) and the Wye Valley Trial. He even held for a time the sidecar record at the famous Red Marley Hill Climb.

Interestingly, Chris Stagg was another who rode in the 1933 Cotswold Cups Trial, on a solo 348cc Baughan. He won the Triers Cup and was later destined to follow in Bill Hayward's shoes as Baughan's Works Manager.

It was Bill Hayward's run of successes that prompted Motor Cycling to publish an article in their May 31, 1933 issue written by Harry Perrey, Competition Manager at Triumph. Entitled Sidecar Wheel Drive – Is It Really Necessary to Trials Successes? it is hardly surprising that Perrey would be in favour of this additional transmission aid. He did, however, believe it was unfair for a driver of an SWD outfit to have marks deducted before he even started in a trial, some clubs having already adopted this approach, whilst others were considering banning them altogether. Norton now had their own SWD outfit, driven by Dennis Mansell. Overall, Perrey thought it would be to the ultimate good of all to exclude them, especially as in all probability he considered they would never become a viable commercial proposition. He listed their disadvantages as an additional 25-301bs weight penalty and an extra £10 in cost.

This provoked a reply the following week from Castor, one of the magazine's staff. He spent a day in the Stroud area with Bill Hayward's outfit accompanied by Bill and Harry Baughan. When he took over as driver, with Harry Baughan occupying the sidecar, he was left with no doubts about the effectiveness of sidecar wheel drive. Ascents that had proved unclimbable with the sidecar wheel drive disengaged were ascended with ease when it was connected. 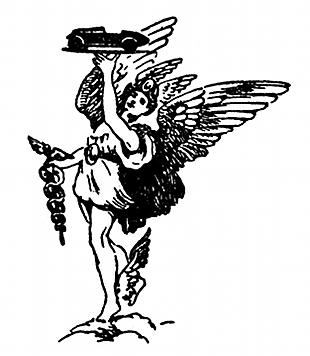 There was not even the tendency to 'crab' on slippery surfaces as had been all too evident before. He was the first to acknowledge Perrey's comments about the additional strain it placed on the transmission, however. A chain broke during the test which sent them rolling backwards until the branches of a conveniently placed tree brought them to a halt!

Others who contributed to the Baughan's ever growing list of competition successes included A. Hill who lost only one mark in the 1935 Ilkley Grand National and Ralph Dee of Nailsworth who had several successes with this marque in the Midlands. Sadly, the company seems to have reached its peak in 1935 as thereafter the Baughan is scarcely mentioned. All motorcycle production came to an end in 1936, when a further diversification was made into general engineering work. By now the ACU had banned sidecar wheel drive as they considered it provided an unfair advantage in having two driven wheels. It is a ban that still holds good today. Of the original players, none is any longer with us and the Baughan is now a forgotten name with not a single example listed in the latest edition of the VMCC's Machine Register.