It was the ever elusive `everyman' market, that was to be the spur which led to the designing of an ultra-reliable, economical, capable, but viceless little motorcycle in the years before World War II. Although Britain was fast emerging from the bad times of the early 1930s, those fortunate enough to have money to spend on personal transport were not spending on motorcycles. The trade had entrenched into the sporting sector (very much as right now) to survive; hairy single cylinder ohv designs with upswept pipes, high compression ratios and lots of tinkering to keep them going, weren't likely to appeal to the ride-to-work man. There were some notable exceptions to the rule, with imaginative designs from Francis-Barnett and Coventry Eagle amongst them but in the main, one had to be an 'enthusiast' to consider owning a motorcycle.

Two stroke engines
Then, freelance designer G.H. Jones, in conjunction with the Villiers Engineering Company, suppliers of two stroke engines to all and sundry, came up with an admirable alternative that seemed to fit the bill, based around a ladies style open frame cycle, but with some springing in the front forks.

The term Autocycle suited it perfectly, for with pedals to start the 98cc engine and han­dlebar levers to control both brakes, it was indeed a motorised cycle. 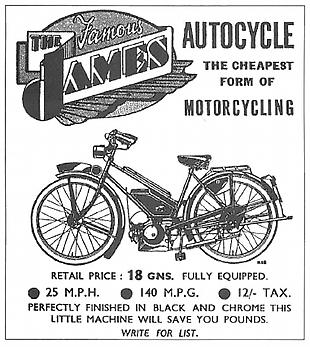 The single speed transmis­sion was provided with a clutch, so that stopping, start­ing and idling was civilised enough and a Villiers fly­wheel magneto neatly attend­ed to ignition and lighting requirements.

The Autocycle's real ace though, was down to the fact that it was thought out as a complete machine, not simply a clip on engine relying upon over­stressed bicycle parts.

With a few mods to ease production, Villiers tooled up for the little engine/clutch unit, that was to lie horizontally below the bottom bracket of the frame, they called it the 'Junior' and with­in two years of production commencing in 1937, a host of makers were offering Autocycles to the public.

Most had some distinguishing features, perhaps the shape of fuel tank, the method of brak­ing, or the size of tyres, but all utilised the Villiers Junior engine and the twin downtubes open frame style of the Jones prototype.

Old-established bicycle maker Raynal, was perhaps the first on the scene, with the 'Auto', another cycle firm Dayton, re-entered the world of powered wheels after a gap of 25 years with their 'AutoCycle', James also had an 'Autocycle' (all one word this version), Coventry Eagle an 'Auto-Ette', Excelsior an 'Autobyk', Francis Barnet a `Powerbike' and newcomers Norman, a 'Motobyk' ; the model namers were working overtime!

Something else they shared was the selling price, for just £1 was the difference between any of the marques. In early 1939, there were two prices covering the lot – 17 Guineas (£17.85) or 18 Guineas.

Bowler hatted
The cheapest true motorcycle at the time, was Pride and Clarke's 125cc Cub at £21.16.0 (£21.50). With bowler hatted city types, nurses, housewives and other unlikely owners soon perambulating around on these pop-pops, the true enthusiast quickly coined a disparaging name for the humble Autocycle – they called them 'Wilfred's'. Villiers updated the 'Junior' at the very end of '39, after WWII was underway; the original overhung crankshaft design was retained but the one-piece iron barrel and head with its simple three port layout and deflector top piston went, in favour of a loop-scavenge layout, having a detachable alloy head and flat top piston.

Fully interchangeable with the earlier engine, the new unit was termed the 'Junior de Luxe'. New Hudson, an old name then in the hands of the BSA group, and Sun now joined in with other Autocycle look-a-likes and, when peace returned in 1945, the Wilfred was to remain very much a part of the everyday scene. 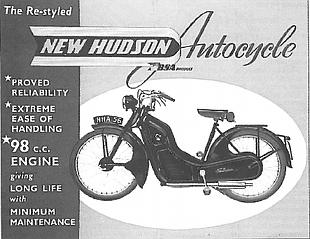 Dayton and Coventry Eagle didn't start up post war, but the others were soon joined by Aberdale (later to become the Bown Auto-Roadster), while Excelsior added two models with their own brand power units – the single speed Spryt and, something of an innovation, the two speed Goblin.

In 1949 Villiers again meddled with the Autocycle engine, this time quite markedly, because the model 2F needed a conventional loop frame to accept its mountings, the cylinder being canted forward slightly, the crankshaft now having full support to both sides.

Excelsior dropped their Villiers engined model and Raynal fell away altogether; but the rest plodded on in the austerity years that should have ensured them a ready sale.

Unfortunately, as with seemingly too many British ideas, the Autocycle stood still while the rest of the world was moving on, particularly in Europe where first the new breed of clip-on power units gained a strong following and, from them, the complete cyclemotor was developed into the 50cc Moped (a name coined by the German industry in the early 50s).

One by one the Wilfreds, with their simplistic features, went from the lists. Excelsior last­ed longer than most, to 1956; Norman went one year more, but hedged their bets by introduc­ing a 50cc Sachs engined moped, the Nippy, the year before. Bown also tried a Sachs powered 50 but only New Hudson, with the might of BSA behind the name, made any attempt to update.

The 1956 re-design was the most sophisticated Wilfred of them all, well shielded works and appealing styling, it deserved perhaps better than a two year run; but its time had passed and by 1958 all had gone.