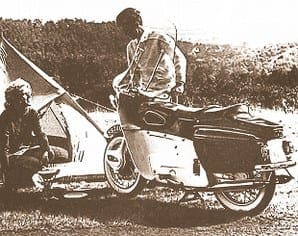 When, during 1943, Jack Sangster decided to sell Ariel Motors to the BSA Group, there was concern at Selly Oak lest the company should lose its identity. This concern heightened in March 1951, when the Triumph Engineering Company also became part of BSA. Fortunately, it was not until many years later that what had been anticipated became a reality, by which time a radical change had already taken place in the type of machine made at Selly Oak.

Earlier research had shown their range of four-strokes, mostly of pre-war origin, were in danger of being outmoded by their rivals within the next few years. A replacement was urgently needed, the general consensus of opinion being that it should be a 250cc two-stroke twin. Work on the project commenced early in 1956, when Bernard Knight joined veteran designer Val Page to start work on what was to be the latter's own swan song. The result was the Ariel Leader, which broke new ground for the factory in virtually every respect. 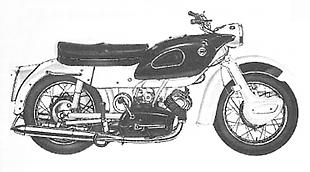 Although the power unit was similar in many respects to that of the German-made Adler twin, the cycle parts were quite different. Conventional frame manufacture had been discarded in favour of metal pressings, using a box-section beam frame from which the engine was suspended and enclosed within detachable bodywork panels. The main body pressing incorporated what appeared to be an integral fuel tank, but in reality it was a dummy, containing only a lockable compartment for carrying luggage or even an open- face helmet. The bodywork also incorporated a front apron and screen, like that of a scooter, and built-in legshields, for added weather protection.

Battery and toolkit
The fuel tank, battery and toolkit were housed beneath the hinged dualseat. rear suspension was of the hydraulically damped, swinging-arm type, whilst at the front a trailing link fork with two-way damping ensured a constant wheelbase.

The 249cc (54mm x 54mm) engine was built in unit with a 4-speed Burman gearbox from which the gear clusters could be renewed without disturbing the engine. The inclined cylinders were horizontally finned and fitted with light alloy heads, being of the conventional piston port design. Of built-up, type, the 180 degree three bearing crankshaft was of exceptional rigidity, with ease of servicing kept in mind by adopting a key and taper coupling in the centre of the shaft. This was secured by a bolt, readily accessible through the hollow mainshaft. Each big end had a double roller bearing and engine lubrication was by petroil. 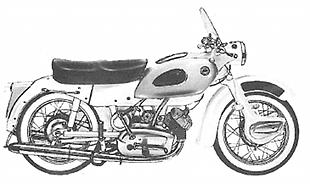 Drive to the gearbox was by endless chain, with a rubber covered spring steel tensioner, adjustable externally. The right-hand end of the crankshaft carried a 50 watt AC generator, the left-hand end a twin contact breaker assembly. Carburation was by a single Amal Monobloc fitted with a replaceable element air filter and ignition, by twin coils.

The clutch incorporated a rubber cush drive shock absorber and had a rattle proof corrugated body and three 'wet' plates. Final drive from the gearbox was by chain, fully enclosed within a pressed steel chaincase. Both wheels were of full-width hub type, having 16" rims shod with 3.25" section white-walled tyres. The rearmost section of the rear mudguard hinged upwards, to aid wheel removal.

Two-tone colour schemes
There was a choice of two, two-tone colour schemes – Cherokee Red, or Oriental Blue; both having Light Admiralty Grey as the second colour. Wheel rims, silencers, control levers and other bright parts were chromium plated. Retail price at the time of the launch in July 1958 was £168 plus f41.11.7d Purchase Tax. According to the maker's catalogue, maximum speed was approximately 70 mph and fuel consumption 80/90 mpg. 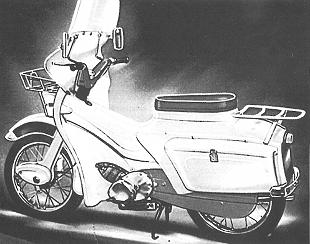 After about 20,000 Leaders had been made a number of variants began to appear. The first of these was the Arrow, virtually a Leader stripped of its legshields, instrument panel and side panels. Then came the Golden Arrow, a sports version with Gold and White finish; still later came the Arrow 200, which gave learner (and other) riders the advantage of a lower insurance rating. Inevitably, the Arrow was used for sporting purposes. Sammy Miller, then working for Ariel Motors, prepared one for the ISDT and later rode it almost to the summit of Ben Nevis. Hermann Meier prepared one for Michael O'Rourke to ride in the 1960 Lightweight TT, which finished a very creditable 7th, at a race average of 80.18 mph. Ernie Earles combined two Arrow engines for Bill Boddice to use in his sidecar outfit, a project that was not a success, as the power band was too narrow.

In the face of all this activity, Ariel had ceased production of their four-stroke range entirely during August 1959. But notwithstanding the early promise of the Leader and Arrow two-strokes, by the autumn of 1965 (when only the Arrow 200 was in production) they too were discontinued. The worst fears of the Selly Oak staff had now been realised and Ariel Motors soon closed. When BSA subsequently decided to adopt the Ariel name for their dreadful 50cc tricycle – the Ariel 3 – it merely added insult to injury!

It seems to be the ultimate objective of anyone who has restored a Leader to kit it out with all of the optional extras that were at one time available; but are now almost impossible to find. They comprised the following:- Trip speedometer (an option only offered when ordering a new machine). Eight day clock for the instrument panel. Electronic gear selection indicator, also for panel fitting. Metal panniers with lids, locks and removable holdalls. Colourful handbag to fit the rear carrier. Set of flashing indicators with controls and wiring. Luggage carrier with two adjustable luggage securing straps designed to fit neatly on the tail member. Inspection lamp with cable and connectors. Two-way parking lamp designed for easy fitment. Waterproof dualseat cover. Side prop stand and, finally, a detachable front stand.