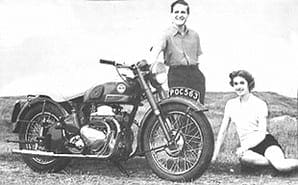 Four cylinder motorcycles have been with us for a very long time – longer than many of us would think. The first was the Holden, which went into production during 1901, followed by the Binks of 1903. Others soon followed suit and most of us will be familiar with the Belgian-made FN and the Henderson and Pierce Arrow from the USA. With the exception of the Holden, an in-line four was favoured, mounted either transversely or longitudinally in the frame. The latter, however, was likely to necessitate a long wheelbase.

Ariel did not come into the picture until very much later on. The company (then known as Ariel Works Ltd) found themselves in financial difficulties during 1925, largely due to stagnation of design. It was not until the company's managing director, Charles Sangster, took a firm hand that a complete change of fortune was brought about. It was fortuitous that at that time Val Page, JAPs chief designer and a brilliant engineer, found himself redundant when the Tottenham-based company closed their racing department. Sangster was quick to realise his potential for revitalising the Ariel range. He engaged him in a similar capacity, with the result that at the 1925 Olympia Show, Ariel displayed a complete range of models fitted with new engine units for the 1926 season.

Significant move
Two years later, Sangster made another significant move. In January 1927 he took on a young designer, Edward Turner, who was running his own motorcycle business, Chepstow Motors, in Peckham Road, Camberwell. 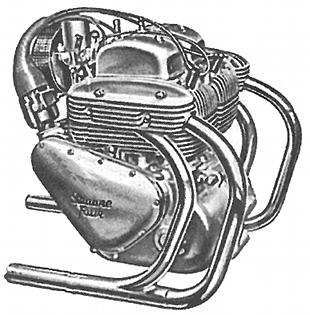 Turner had designed and made a 350cc overhead camshaft single and had travelled to Coventry in the hope he could find someone in the Midlands to manufacture it. Turner and Sangster met quite by chance, and instead Turner was offered a job in Ariel's design department, working for Val Page and assisted by Bert Hopwood, then a junior draughtsman. One wonders if Sangster realised what an abundance of talent he had assembled under the same roof! Turner's design went into limbo and instead he found himself involved in designing something far more intriguing – a four cylinder model which had been at the back of his mind for some time.

News of the new four-cylinder model did not break until the latter half of 1930, when Ixion disclosed in The Motor Cycle dated September 18, 1930, that he had been riding the prototype for about a week. Unable to disclose the manufacturers name he had to refer to it as a "mystery four", although he was permitted to show how the configuration of the cylinders had been arranged. To say he had been impressed was no understatement.

Production models
Turner's prototype design weighed 376Ib with full tanks, and it was expected the production models would weigh even less. It was vibrationless such that when a glass of water was placed on top of the petrol tank whilst the engine was ticking over there was only a faint ripple on its surface. It was silent too, the exhaust note being more reminiscent of that of the baby Austin Seven at that time. The engine was so flexible that the machine would pull smoothly down to 5mph in top gear. Indeed, Ixion had ridden it thus up a kerb, through a gate and round a sharp corner into his garage. Praise indeed!

As expected, the 498cc Square Four made its debut at the 1930 Olympia Show, catalogued as the 4F31 model and listed at £70, with an additional £5.10s for electric lighting. It drew huge crowds to the Ariel stand.

The design was unconventional in many respects. The cylinders were arranged in pairs within a monobloc cast iron cylinder barrel, like two vertical twins placed one behind the other. They were phased at 180 degrees. The front and rear crankshaft assemblies were joined by central helically cut flywheels that ran within an inner flywheel case. All four big end assemblies were of the overhung crank type, the drive to the built-in unit gearbox being taken from the central coupling gear of the rear crankshaft. The crankcase assembly followed car practice and separated horizontally. The two valves per cylinder were operated by rockers bearing on the single chain-driven overhead camshaft, the latter having a vernier coupling like that of the AJS ohc models to make resetting the timing easy. 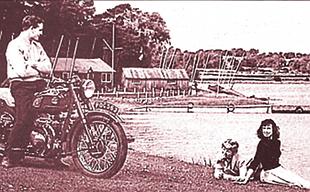 The single carburettor faced forward, with an intake arranged transversely to prevent the ingestion of unwanted debris. A rearward mounted magneto supplied the ignition via a distributor on the nearside of the cambox. The exhaust system was of the twin port type, the cylinder head being cored internally to provide a two-into-one arrangement between the front and rear cylinders.

Lubrication was thorough, on the wet sump principle, with gear-type oil pumps to feed oil to the inner flywheel case and the overhead camshaft. Of four pint capacity, the oil container formed a separate compartment at the rear of the crankcase.

What was not evident was that Turners original concept of the four had been considerably watered down, to effect production economies so that the price could be brought to a reasonable level during the economic recession that then prevailed.

The original engine unit had been much lighter and narrower, employing a coupling gear in the middle of the rear crankshaft to drive a three-speed gearbox built in-unit with the crankcase assembly.

Overhung crankshaft
Instead, the nearside rear cylinder, which originally had an overhung crankshaft assembly like the other three now had a fully built up flywheel assembly of conventional design, with provision for an external engine sprocket to drive by chain a four-speed Burman gearbox mounted behind the engine unit. Furthermore, it was also decided the standard and much heavier frame of the SG31 production model should be used, not the one specially designed by Turner. Not only had the Square Four become much heavier but also the edge had been taken off its performance.

The task of making these changes had been the responsibility of Val Page, who was highly experienced in such matters, but no doubt they were undertaken with reluctance. It blunted the enthusiasm of both Turner and Hopwood, who were convinced the Square Four in its original form would have been a world beater.

Discounting the war years, the Square Four remained in production until August 1959. Although it had never sold in large numbers, it nevertheless had its advocates, amongst them Arthur Bourne (Torrens), the one-time editor of The Motor Cycle, who often wrote about his travels on one.

During the years that followed, the Square Four underwent many changes, which included increasing its capacity to 597cc, then 997cc, operating the valve gear by push rods, and fitting an alloy cylinder head with four separate external exhaust ports. Whether or not it can be judged a success in terms of financial gain compared to the other models in the Ariel range is a moot point.

As Val Page once said about the Triumph twin "if the twin is so good, why did we bother with the four?". Even so, it is very pleasing to know that Britain had a very practical four cylinder model on the road so long ago, with its cylinders arranged in a form that is still quite unique today.