It’s a relative term really – Lightweight, it all depends upon what it is you're judging it against. For Associated Motor Cycles, it meant lighter than the range of AJS traditional 350 and 500 singles that had seen them through from 1945 to the mid 1950s; good solid British style bikes that were well finished, neat, but not exactly in the forefront of design. Nor were they ideal for the first time buyer, being built high, wide and heavy.

News was about, that learner riders might soon be forced by UK legislation to limit their ambitions to nothing larger than the quarter litre class and although AMC had their satellite companies, James and Francis-Barnett, firmly settled as market leaders of under 250 two strokes, they couldn't afford to ignore the four stroke sector, for it would be in that very area where the 'Learner Enthusiast' would be looking for his first bike, if the restrictions came about.

The 4 stroke 250 capacity class had been badly neglected after World War H, with only BSA of the major producers having a regular offering, albeit one that had stagnated.

Royal Enfield began the move towards fresh thinking with their Crusader line in 1956. BSA were to follow with the C15 Star by mid 1958, but earlier in that year AMC announced the MS model 14 and its Matchless companion, the G2.

Firstly, for export only, they were on the home market by June of '58, in good time for the motorcycle buying spree that saw out the fifties.

The model 14 joined the move towards clean styling and smaller wheel diameters (17") of the time, but didn't opt for the unit construction of engine and gearbox of their competitors.

True, the power and transmission assembly looked to be one unit, but it wasn't, the side cov­ers just gave that impression. In fact the 4 speed gear cluster was contained in a separate cir­cular shell which was cunningly rotated, to provide adjustment for the primary drive chain.

Build was otherwise rather conventional and simple, although the valves were under the control of hairpin springs and the inlet tract did incorporate a sporty degree of down-draught.

Dry sump lubrication via a worm driven plunger pump having feed and return diameters was also conventional UK practice, but the sighting of the oil tank certainly wasn't – it was tucked in beneath the offside engine cover, in front and below the timing chest. Neat enough, as there was a total absence of exterior pipework, but boy, didn't it make for a bulky outline to the motor. 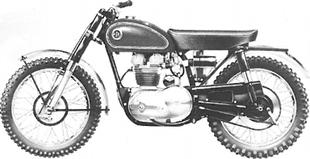 Coupled with rounded head and barrel finning and generous curves over the nearside clutch and alternator cover, the kindest description for this oversize lump might be 'chubby'.

To complement our 'chubby' non unit, the cycle parts realty had to be built on simi­lar generous lines and they were.

Ample mudguards of 'deep section heavy gauge steel' to quote the maker's catalogue, large side panels, rounded 2.75 gallon fuel tank (increased to 3.25 gall from 1960) and plenty of metal in the composite tubular/pressed steel frame, all added up to a man-sized motorcycle weighing in at no less than 3251bs.

With 18bhp on tap, the 14 could still move along as well as, if not better than, the lower powered but much lighter Beesa and Enfield offerings, but it was its appearance rather than in the manner of its going, that would prove to be the bike's greatest handicap.

It wasn't a young blood's ideal, never could be. Even later on when its makers tried to turn it into a 250 version of the CSR sports twins, old `chubby' still shone out from under the chrome and glitter, to remind one of his origins.

At first at least, the quality of AMCs product was apparent, paintwork and detail finish were both excellent by the standards of the time, an optional full chaincase enhanced the Mr Clean image and the load adjustable long Girling legs controlling the swinging arm, together with an ample dualseat, gave a very comfortable ride for a 250.

In 1960 the design was stretched to make a Lightweight 350, the model 8, in which all was much the same, except that 18" wheels were adopted along with 'Teledraulic' forks off the heavyweight AMC range (the standard 14 had the James/Barnett pattern teles). 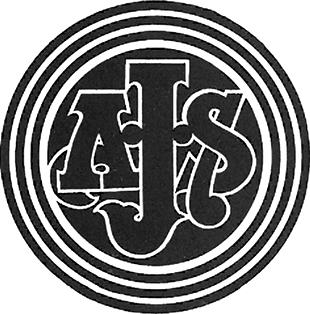 Overweight, overpriced and of no particular merit, the 14CS must have had the Greeves and DOT men trembling with laughter.

The standard model 14 had gone in 1963, a time when 250 sales were really booming to meet strong demand from the teenage learners who had by then been restricted to that threatened 250cc maximum – the very threat that must have played such a part in the origins of the AJS lightweight. OK, so they didn't get it right then, but what about today?

The model 14 and its derivatives languish at the back of autojumble stalls and dealers' premis­es around the country; prices are still at rock bottom, aren't they worth a good home?

Surely they must be, their biggish build isn't so obvious to the eye now that Japanese 250s are the physical size of our old 650s; the later models could certainly motor – remember, Peter Williams took a 14CSR to a class win in the 1964 Thruxton 500 Miler – so give 'em a good hard look, the 'chubby' 14s are probably as good an inexpensive intro to the old bike game as anything around today; most who criticise them now, never owned one when they were young to know how good or bad they really were.