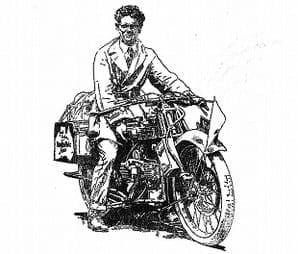 Ever since the early days of motorcycling, riders have sought challenges of various kinds. Sometimes they were factory inspired, to draw to attention of the general public the outstanding qualities of a new model and how well it would perform under arduous conditions. The resultant publicity not only helped boost sales of the new model but brought its hand-picked rider a brief moment of glory too. Others set about a challenge in their own quiet way, on their own machine, without the knowledge of its maker. They rarely attracted much attention, being content to have achieved their objective and an interesting story to tell their friends. It was often reason enough to fulfil an ambition simply because the rider had always wanted to do so.

One of these lesser known happenings took place on October 1, 1924, when 23 year old A.W. Grady left Freemantle on a 348cc 3 speed model CW Douglas. He set out unaccompanied on what was generally accepted as the most difficult journey ever attempted on a motorcycle – to ride around some 9,000 miles around Australia. Few can hope to appreciate fully the sheer magnitude of this venture, for at that time vast areas of Australia remained unexplored. At times Grady would have been out of touch with civilisation and failure of his machine would have meant certain death. 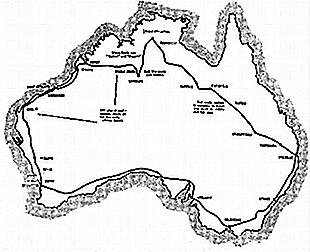 Fortunately, Grady kept a log of his progress, which was later published as a small booklet by Douglas Motors Ltd. to commemorate his achievement. It makes interesting reading and extracts are taken from it in this account of his progress. Little is known about the origin of the machine he used, and not much more about its preparation. As space and weight were strictly limited, personal comforts such as blankets, a towel, razors etc had to be left behind. The essentials carried comprised an army ground sheet and a mosquito net which, tightly wrapped, were attached to the front fork, and his sole concession to personal comfort and hygiene was a toothbrush carried in the rider's pocket!

To supplement the 1.5 gallons of petrol and 1 quart of oil held by the tank of the Douglas, two one gallon cans of petrol were attached to the sides of the rear carrier, along with an extra gallon of oil. On the top of the carrier he had mounted a cartridge box, which contained spare parts for his machine and puncture repair kits. Slung from the offside supplementary petrol can was a truly indispensable item, a 2 gallon waterbag.

Hard corned beef
A 2Ib jam tin bolted to the rear number plate acted as a billy can, and some hard corned beef was wrapped around the handlebars! Tea and sugar accounted for the remainder of the consumables carried on board. On his person Grady carried a small first aid outfit with a good quantity of fever mixture to overcome problems with mosquitos, dysentery from varying water supplies, and for dealing with general ailments.

Not surprisingly, the overall weight of the Douglas was considerable, amounting to a total of 450Ib, including the weight of the rider. As a sensible precaution against overloading the beaded edge tyres, Bates tyres of oversize section had been fitted in place of the originals. A sketch in the Douglas booklet shows Grady wore nothing special in terms of riding gear, just a belted jacket with flap pockets, what appears to be ordinary trousers and shoes, and no hat or goggles. There is no evidence of gloves either, although these must surely have proved a necessity.

After send-offs at Freemantle and Perth, he headed into the Gascoyne district, where having to cross rivers and creeks made it hard going. In Minilya, the next district, conditions were even worse, with deep heavy sand churned into powder by the waggon teams. It necessitated having to travel for 800 miles mostly in low gear. There was little relief until he reached Palm Springs, where he slept overnight in a bunk suspended by chains to keep it clear of snakes.

A thunderstorm delayed progress towards Inverary for two days, and the track became difficult to follow, causing Grady to wander far off route and having to backtrack. Dragging through long sword grass caused the waterbag to leak and lose its contents. Totally washed out with the effort, Grady abandoned his Douglas after making sure it could be located from a distance, and set off on foot to find the creek he should have crossed. Luck was on his side, and finding both the creek and the track he returned to his Douglas to resume his journey. Crossing the creek meant plugging the exhaust pipes with grass, greasing the carburettor and magneto, and stuffing a greasy cloth into the former's intake. A smear of grease sealed the filler caps. By midstream only the handlebars were visible, but on regaining the opposite bank and removing all the seals, the engine started willingly and Inverary was reached at last.

Volunteered to lend
At Inverary help was available from Farquahson Bros, who volunteered to lend Grady a guide with a spare horse and two pack horses as the detour had left him with insufficient petrol to reach his next stop at Ware Hill. En route a footrest hit a stone, bending it back to buckle the gearbox sprocket and lock the rear wheel. After detaching the chains and removing the sprocket, he bent it back into shape over a fire, using a large flat stone. On the move once more the horse was soon needed as the petrol ran out 40 miles from his destination.

At Ware Hill the temperature was 114 degrees, so an early morning return with the petrol to the abandoned Douglas was necessitated. At this point his guide and the horses left him. Soon a deep gorge had to be crossed, so this time the Douglas was dismantled and carried across the river in large lumps, to be reassembled on the other bank. Further on, progress was halted by a massive bush fire.

Another detour would have meant the risk of again losing the track, so a compromise was sought. By sighting landmarks and keeping uncomfortably close to the fire, the track was regained and progress resumed. 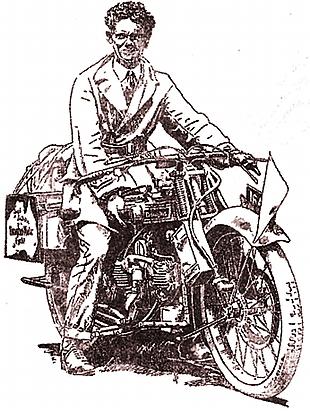 The never ending chapter of catastrophies continued, which at one stage necessitated Grady having to make his own oil by mixing castor oil with a half gallon of liquid beef dripping and two pints of windmill oil. Surprisingly, the Douglas continued to run as well as before and even travelled 73 miles on paraffin when no petrol was available.

From Katherine the Adelaide to Darwin telegraph line could be followed, which made navigation much easier. Not until his arrival in Camooweal was the last seen of the terrible Northern Territory, and on reaching Queensland soil, it was a relief to take the inland road to Brisbane. The receptions that awaited him at Brisbane, Sydney, Melbourne and Adelaide made the last part of the journey along the track from Adelaide to Perth pale into insignificance, and on March 14 Grady rode into Freemantle, five months and 14 days after his departure.

Incredibly, not one spare part had been fitted to his Douglas nor had he suffered a single puncture! Even today, Grady's journey must count as one of the most challenging ever to have been attempted on two wheels.

It is all the more remarkable as a standard model CW Douglas can hardly be regarded as a machine suitable for such hard going.