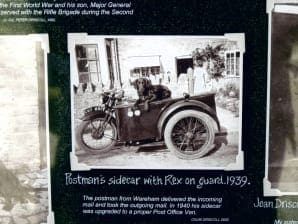 We visited several local museums on our recent trip, and a seemingly recurring exhibit was the sidecar as a workhorse.

At Wick, in the far north-east of Scotland, and Mevagissey in Cornwall, local characters used sidecars for their trade as milkmen, one ‘float’ being attached to a succession of Nortons for delivering milk from the rider’s own herd to the surrounding area.

Before the advent of ‘White Van Man’, the commercial sidecar was a common sight on British roads, with both the RAC and AA using them, the latter usually attached to BSA side-valves while the rather more stylish blue Nortons of their rivals must have been a far more exciting proposition for their patrolmen.