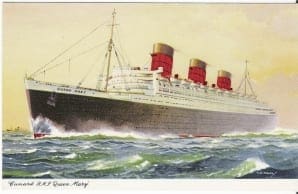 I used to be in the British Merchant Navy, and once, while I was on the Cunard liner Queen Mary, I forgot to arrange to get my BSA twin, PAA 515, put away for the trip, so I left it on the quay, under a crane at Southampton’s Ocean Terminal, and set off for the 12-day return voyage to New York. When I got back it was still there.

Others started to do the same and eventually we were told to find somewhere else to leave our bikes.

It was suggested that I see the shed foreman at Harland & Wolff, where my bike would be much safer, and this I did.

All I had to do was give him 200 Lucky Strike cigarettes, bought in New York for $1 (seven shillings in those days, or 75p today) and he’d keep an eye on it for me.

It wasn’t long before H&W had quite a few bikes kept at the cost of 200 Lucky Strike each, so the foreman was well and truly paid in American tobacco!