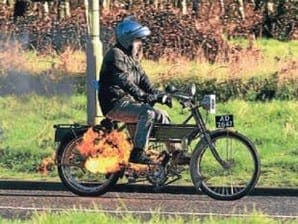 In tune with what was perceived to be the buying public, MotorCycling’s editor Bernal Osborne was pictured in Stormguard and waders trickling along at walking pace on the test model released by Velocette.

In the main this would be the sort of riding equipment a lot of the readership would wear as motorcycling wasn’t aimed at the youth market in those days. Teenagers had been heard of but were thought to exist only in certain parts of North America, most definitely not in the UK and the concept of someone under the age of 150 buying a motorcycle and ‘…heading to the cafe to pick up a bird…’ was met with horror.

Elsewhere in the feature MotorCycling’s tester – unnamed but looking suspiciously like David Dixon – took to an aerodrome for the performance tests. With a speed range in top of 12mph to 90mph the sporting 350 came in for extreme praise and surprise that this performance was allied to a docility making touring a pleasure.

MotorCycling’s man felt the owner who might want to indulge in a speed trial at club level or even some club racing, would benefit from an alternative footrest arrangement to complement the reversed handlebars fitted to make the racer crouch – quaintly referred to as the-getting-down-to-it tactics – more comfortable. Of course our mythical owner wouldn’t do anything so anti-social as racing up the high street to impress his mates, though he may indulge in the then not-so-anti-social practice of discussing the finer points in the Viper package over a pipe full of rough shag tobacco down at ‘the club’ with the chaps.

Points discussed, as the tobacco smoke filled the air, would be braking from 30mph and handling under all road conditions an owner was likely to meet in a year round riding season. Comfort for two was also a consideration and the likely pillion passenger would be ‘the little woman’ being given a break from the kitchen sink or cooker for an hour or two on a sunny Sunday afternoon, possibly for a run along on a club outing with the chaps to Somewhere-on-Sea for a bracing bout of sea air.

That was then… this is now…

What happens though when our sparkling new model becomes last year’s machine, superseded by the latest offering from the factory that claimed, once again, the new machine was perfection? These test models owned by the factory or supplied to a trustworthy dealer who had probably known the family who started the factory could often have a chequered career once their duty was done.

In the case of the Velocette Viper tested by MotorCycling and registered SOP 367, it did sort of disappear from society though its current owner, Chris Green, had known about it for some time. “It was in a friend’s garage with nothing being done to it at all, and it hadn’t been on the road since 1984,” he tells me, adding that the bike is the earliest known Velocette Viper out there, being stamped engine number 002. “If 001 actually exists then it hasn’t ever surfaced and we reckon it never left the production line.” To all intents and purposes the low mileage registered on the odometer is genuine. An inspection at Aspire Classic Restorations, in Enslow, near Kidlington, Oxon, during the refurbishment suggests neither the engine nor gearbox have been apart since the speed tests. It was also pointed out to Chris that, in the opinion of the lads at Aspire the Viper engine contained a fairly high compression piston and some seriously pointy cam profiles. The point of this being when MotorCycling’s editor rode the machine in the manner most of his readers would appreciate, a nice soft flexible engine would be needed. Then, when the factory brought it along for the high performance runs, perhaps they slipped in some racing gear to pep the engine up a little. If they did then Velocette wouldn’t be the only maker to try this line of image making.

Originally the frame would have been finished in a willow green colour but it had been partially restored and finished in black which had been applied quite well and Chris tells me he was reluctant to strip it off. “I chucked a load of money at the petrol tank though as it had got really bad, tarnished chrome and no paint, that’s all sorted now and the bike is just about ready for the road again.” However, if anyone knows the history of the bike before the 1970s, when his friend got it, Chris would love to hear.