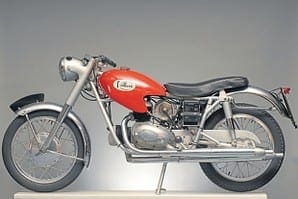 The machine is a 500cc Villiers V4 special built in 1962, and Sam writes: “If Mr Hockley would like to come and see us, we’d be happy to show him the bike where it is on display.”

Villiers, of course, made proprietary engines rather than complete machines, and the name on this amazing special’s tank pays homage to the origins of its motor. It was built by engineer Bill Hindes and quickly bought for evaluation by Villiers Ltd, coming to light again only when the company – then under Manganese Bronze – sold off some relics in 1978.

The motor is an amalgamation, in ‘V’ format, of two of Villiers’ well-respected 2T two-stroke twins, and its builder used as many standard components as possible, including all of the top ends plus the crankcase centre pieces and side covers.

Wider crankcase halves had to be cast and machined, of course, but the crankshaft itself is fairly standard except for longer crankpins carrying side-by-side connecting rods.

The main design problem that had to be overcome was that, with two cylinders on each crankcase half, normal two-stroke induction wouldn’t work, so a Shorrock supercharger was employed to force the petrol/air mixture into the engine.

The power unit fits neatly into the Douglas Dragonfly frame with Norton forks, and the motorcycle reportedly handles and performs well, besides being virtually free of vibration and possessing a totally unique exhaust note.

Dave Blanchard remembers seeing it being ridden around the Brands Hatch Indy circuit during the 1991 Festival of 1000 Bikes when the event was organised by the West Kent Section of the VMCC.

“Sammy rode it behind the pace car and was wearing a bright orange riding suit that almost matched the colour on the tank,” he writes. “I have a VHS video that we took of it going very well, but why ‘Greeves 4’ is on the tank in last month’s picture I don’t know – maybe the engines originally came from Greeves bikes.”

Thank you all for clearing up the ‘mystery’ for everyone, including myself, who remained unaware of this remarkable bike. In fact when I first saw the picture that Sammy sent us, with two Villiers engines, a Dragonfly frame, Norton forks etc., I was convinced it was a computer-generated April fool. Just ask Tim Britton! – Pete Kelly