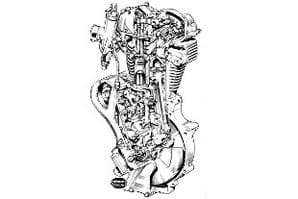 Of the many motorcycles the company produced the 500cc Venom and 350cc Viper have to be the ones that catch the attention of enthusiasts in 2012. Though the Venom gained all the glory with its record breaking ancestry, arguably the 350cc Viper engine is the better motor. MotorCycle commissioned a cutaway drawing of the engine so that enthusiasts could see exactly what was going on inside.

Though closely related to the 350cc MAC models it had significant differences that made it stand out from the touring range. The main advantage the 350 sporting engine had was its top end being fitted to a bottom end that was the double of the much more powerful Venom 500. The Viper got the tough crankcases, flywheels, crank and rod of the bigger engine giving it an almost unburstable reputation.

Developed from the MAC with a 72mm bore and an 86mm stroke the Viper remained in the range for 15 years and had quite a high specification for a small bike. Sitting on the strong bottom end was a bi-metal barrel – effectively a cast iron liner with an alloy jacket cast round it – alloy cylinder head with hairpin valve springs that followed race engine practice. Also following race practice the Viper could be ordered with a sodium cooled exhaust valve, which is a valve with a large diameter stem, hollowed out and filled with sodium, which turned liquid under heat and added to the cooling effect.