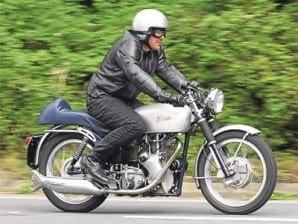 Naming a machine after a race or event is a fairly common theme in motorcycle circles – think Bonneville, Manx, Monza, Oulton, Silverstone. In which case perhaps the super sporting Venom-based single from Velocette could have been named Montlhery in honour of the 24 hour record the company had taken at the Montlhery banked circuit on the outskirts of Paris.

Instead though, it was the UK circuit of Thruxton that the factory chose to provide the catchy name. That Velocette had taken the 500cc class at the 500 mile endurance race held at the Andover circuit may well have influenced them as ‘success breeds sales’ and as the 60s wore on Velocette needed sales – so did the rest of the UK industry but this is a Velocette piece.

By the time the Thruxton was launched Velocette was the only manufacturer offering a traditional sporting single for general sale as BSA’s Gold Star had quietly dropped from the range in ’63. Arguably it was a bit too late for the market as sophistication was about to hit the world as the Japanese machines with a much higher specification were on the horizon.

But, in the world of desire and cult such things are of little concern… the Velocette Thruxton is a stunning and desirable motorcycle that can’t half shift. That it looked old fashioned against its contemporaries is of little matter to us nearly 50 years after the model was introduced. What we look at today is its race bred pedigree from the glory days of single cylinder racing, its lightweight, its superb handling and the fabulous noise that comes out of the fishtail silencer.

This particular Thruxton was the subject of a feature in CBG some years ago – March 2007 – when I was invited down to the south-west to ride the Kear family machine.

BHR racer Austen Kear invited me along after asking if I’d ever ridden one of the super sporting singles and hearing me say ‘no.’ “We’ve just restored my mum’s Thruxton, come and try it.” Austen’s mum, Caroline, is from the ‘Chesire’ family – noted motorcycle dealers in the south-west – and had actually sold this Thruxton when working in the shop. After it had gone through a number of owners it came back into the shop as a trade in for a Suzuki, Austen reckoned it was one to keep a hold of.

Though obviously based on the Venom Clubman production racer, to class the Thruxton as a hotted up Venom would be wrong and, to be even more vague, I’m not sure I should class it as a Venom Thruxton either. I recall having some difficulty in the original test report deciding on the exact model description and will say that in original factory literature the bike is described as a ‘Venom Thruxton’ and ‘Thruxton’ with the only difference I can see being the date of the material. Still, I’ll let the letters page carry the burden of opinion.

Detail differences
When the ’65 Velocette range was announced – late ’64 in common with the rest of the industry – there was little mention of a complete Thruxton model, instead, a performance cylinder head had been produced for the Venom Clubman. This would, when properly fitted and blended in with the rest of the package, produce a machine capable of 135mph. Which was for, the time, a phenomenal speed from a pushrod single and is still not bad compared to the models of today with their super sophistication, multi cylinders and only 40-50mph more speed.

The feature in MotorCycle explained to readers that as well as the cylinder head those in search of ultimate speed also needed the longer inlet tract and the racing carburettor. Unfortunately this meant the standard petrol and oil tanks wouldn’t fit but modified components were available to order but meant the price of the complete machine to this specification was now £400.

For the 1965 range Velocette addressed certain bottom end and lubrication concerns and, for the Thruxton models with power now over 40bhp, the crank cases were also heat treated for extra strength. The Thruxton also got a few more internal changes as the pushrods were shorter than the standard Venom ones and there were improved cam followers, to provide faster opening and closing times for the standard cams.

The rest of the package was fairly special too as, in an era when Velocette seemed to follow the Henry Ford philosophy of ‘any colour you like, so long as it’s black’ the Thruxton had a silver tank, mudguards and battery box with a smart blue frame and other cycle parts plus a blue seat cover. Add in lots of polished alloy and bright chrome and the effect was eye catching to say the least.

On the road
I would be the first to admit that I’m just a tad bulkier these days than I was in my 20s but despite that the ‘clubman’ riding position wasn’t as cramped as I thought it was going to be. I’ve used ‘clubman’ as a description instead of ‘café-racer’ deliberately as the rear set footrests and clip-on bars are a factory fitment rather than an aftermarket accessory kit fitted to a bike that was never intended for them.

This does make a difference as the factory would have to think about a variety of rider shapes and sizes. Anyway, climbing on I found the bike to be particularly roomy and the controls to be well placed, maybe because Austen had set it up for himself and he’s around the same size as me. Starting was a relatively easy affair and involved little more than a light tickle on the carb to get a bit of petrol in the float chamber, bring the engine up to compression, ease it over compression with the valve lifter then a smart kick down on the lever. The only concession to what is a high state of tune for the engine was to keep the throttle up off the stop as there’s little or no tickover. On the go this didn’t prove much of a problem but I did manage to stall at a junction or two and was tooted at by a car behind me… though when I raised myself up off the seat and the driver realised I wasn’t an old fogey or a young kid he could intimidate… But, such is life eh?