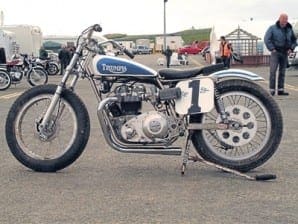 Parked up next to the main tent at the 2010 Beezumph – the first at Anglesey and the year of the extreme weather if you were there – was this T140 Triumph flat track racer and it was being inspected by Gary Nixon.

Too good an opportunity to miss – we got Gary to pose on the bike and asked if he had raced such machines in his day. Gary wasn’t sure as it coincided with a major switch to road racing for the then TriCor man. “I’d have raced the 650s,” he admitted, “but the 750s… well maybe. Certainly the aftermarket frames were ‘in’ during my time.”

With Gary in demand elsewhere, we thanked him for his time and pushed off further round, or attempted to… as the owner of the bike, Steve Cooke, came rushing up and was gutted to find he’d missed Nixon posing on his bike.

Ab fab
I was intrigued to find out why a 1970s flat track racer, still in ‘as last raced’ condition, was in the UK. “I just think they’re a fabulous looking style of machine,” said Steve.

Unfortunately he doesn’t know that much about the machine other than it must be fairly special inside as it ‘went like a rocket when it was briefly on the road some years ago.’

“I’ve not had it apart,” Steve admitted. “We did have a look inside the top end a while back and even the pushrods are ultra special so, working on that principle and how fast it went, the rest of the motor must be fairly special inside.”

If the internals are a mystery then the externals are fairly obvious and reflect the changes in the race scene of the USA in the 1970s. Unfettered by the need to use factory stock parts, or at least the major components such as frames – okay, we’re condensing a good number of years of rule changing here into a two page feature so, bear with us – and forks, there was an opportunity for specialist suppliers to produce kits that used popular power units like Triumph and Yamaha vertical twins.

Competitive Brits
These aftermarket kits, often just frames, helped keep the British engine units competitive for a lot longer than their shelf life. Made from high quality tube and designed with the ultimate geometry for success such a frame, like the Red Line Racing one this T140 Triumph is built into, was one of the two top performing frames in the flat track race scene.

Like the Rickman designed frames in the UK scrambles scene, these Red Line frames were born of necessity – the necessity to win. Like the UK frames the Red Line carries the engine oil in the backbone, there doesn’t need to be gallons of the stuff, just enough to keep the engine lubed and cool during a typical race. Let’s face it, if you’re burning that much oil then you need to check the condition of the engine internals.

But, a great frame is nothing without matching suspension and the world of oil damped springing has moved on since the early days of telescopic forks and rear units. Up at the front end Ceriani forks had graced MX and road racers for a long time and were easily available for special builders and had also been the stock fitting for the only ‘factory’ flattracker on the market – Harley-Davidson’s XR750. Tough, tuneable and with excellent damping characteristics, these units came in a range of sizes to suit all conditions.

When put together, a superb Red Line frame, Ceriani forks, a motor that had 30 years of tuning parts and knowledge – at least by the time the 750 came along – could be built into a race winning package in the right hands.