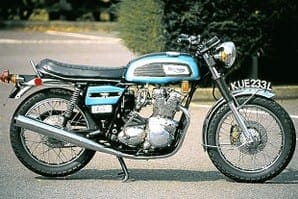 The same capacity as Triumph’s Trident, Honda’s CB750 caught the public eye by virtue of its extra cylinder and race tech spec, though it wasn’t particularly fast. Naturally, thoughts at the then experimental department at Kitts Green turned to a four too.

So, how did they do it? Design a complete engine? Develop lots of trick stuff? No, this was Brit industry on the downturn so ingenuity came into play. “Let’s see if the concept works , then do it properly.” So the race shop engineers took two Trident engines, cut a cylinder off each then Devcon’d the two together… yes, an industrial plastic metal and known as ‘bodging with style’ by those that develop things.

It wasn’t quite that simple but you get the idea. The crank, for instance, was extended by a series of male and female tapers. Given the ad hoc nature of such engineering mild cams and pistons were fitted so as not to stress the components and there was an expectation for things to break. This would provide useful data for a proper look at any production machine’s needs.

The resulting engine was squeezed into a chassis left lying around from a stillborn ohc triple and Trident parts. With the engine a lot wider than the standard triple only rearset foot controls would fit. Good enough to test… but not for general production.