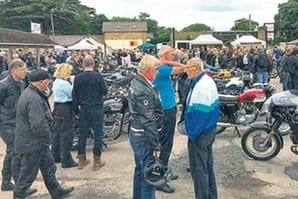 Hundreds of bikes turned up for this great free annual event, and the sun shone too.

With the emphasis on the café racers, ton-up boys and rockers of yesteryear, there were lines of Tritons, Goldies and Norvins to admire, and during the afternoon resident group The Rapiers performed tunes from the golden era.

• Mulberry liquidation casts shadow over BMF events
The British Motorcyclists’ Federation has been forced to cancel the Tail End Show, due to have taken place at Peterborough on September 13-14, due to the voluntary liquidation of Mulberry Events Ltd, which was contracted to organise the BMF’s three annual shows.

The federation now has to work with the liquidators in an effort to recover money paid by members and exhibitors in relation to the cancelled event, and will issue a further statement in due course.

The announcement has cast a big question mark over the future of BMF events, which have been a major part of the organisation’s activities since its formation in the 1960s. They have generated funds to support the federation’s activities in protecting riders’ interests as well as bringing the membership together and raising public awareness of motorcycling.

Despite the liquidation of Mulberry, the BMF insists that it is in good financial health and will continue to represent the interests of motorcyclists throughout the UK.