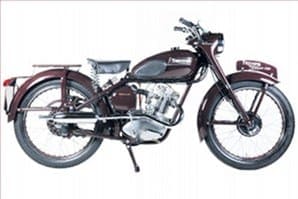 Now a group of at least eight Terrier enthusiasts are planning to do the 1008 miles for themselves. They are due to set off from the Victoria Hotel in Roche, Cornwall, at 11.40am on Sunday, October 6, bound for Land’s End. They’ll then turn around and ride back up the road to Exeter for the first overnight stop – just as Turner and his team did.

On the second day, a reduced squad of six riders will set off for Malmesbury where lunch at the Old Bell Hotel will be followed by a sprint up the A429 to the next overnight stop in Leamington Spa.

Turner left at 8am and so will the modern Terrier team. The route then takes in Six Hills, Bawtry and Doncaster before lunch in Boroughbridge. The next sleepover spot is in Carlisle.

There’s another early start on the Wednesday and the team will head up to Lanark and Stirling before lunching at the Salutation Hotel in Perth. Pitlochry will follow, then it’ll be time for tea at Dalwhinnie before a ride to Inverness.
The last day will see the riders travelling through Dingwall, Bonar Bridge and Helmsdale before reaching John o’ Groats by midday. The final stop is at Wick where Turner himself ended his journey.

A spokesman for the group said: “There will be other Terrier and Cub riders joining the route at times, so please feel free to do the same, whether it be just for 10 miles or a whole day.”

Some members of the group are receiving support with building their bikes from Acme Stainless, RS Bike Paints and Mitas Tyres, while others have offered help in other forms – Scott’s dad and Derek from Greystone Enterprises will be providing backup, Stuart Shaw, mounted on his Hinckley Bonnie, will be the official photo/videographer, and Jean-Marie Guivarc’h has created a modern day artwork most applicable to the Gallop.

If you fancy taking your Terrier (or Cub) for a gallop with the gang, either for part of the route or the whole hog just get in touch with gorgeousbikerchick@aultan.com and if you’d like a chuckle at the current condition of at least three of the bikes intended for the event, take a peek at www.gorgeousbikerchick.com or find more information on Facebook by searching for the Gaffers Gallop 2013.