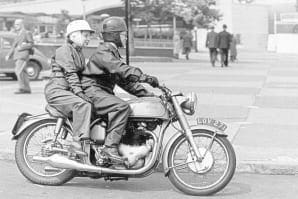 As long ago as 1913, Triumph Motorcycles built a 180-degree vertical twin engine designed by Maurice Johann Schulte, but it was never developed, so the story of the British parallel twin really began in 1932, when Val Page moved from Ariel to the struggling Triumph company as chief designer.

With Edward Turner and Bert Hopwood working under him, he drew up a number of single-cylinder motorcycles before designing the 360-degree crankshaft 650cc parallel twin that was launched as the handsome and workmanlike 6/1 in 1934.

Intended as a sidecar machine and using few pre-existing components, it proved expensive to manufacture and was not the outstanding sales success that had been hoped for.