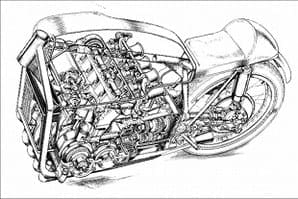 From the date of its first issue in 1903 until its eventual merger with Motor Cycling into newspaper form in 1967, The Motor Cycle wasn’t just a magazine – it was an institution. Among the Blue Un’s staffmen that I was fortunate enough to work alongside in the 1970s were two living legends who were as different from each other as chalk and cheese, yet when Midlands editor Bob Currie and technical editor Vic Willoughby merged their writing talents with the exquisite technical drawing skills of Lawrie Watts, some truly memorable features resulted.

Whether it was walking, talking or rapidly analysing the latest disc-valve two-stroke or exotic multi in his ‘TT Technicalities’ slots, Vic did everything at a breakneck speed. Small in stature, he had the heart of a lion and was no mean road racer back in the early years.

Bob, an everyday motorcyclist through and through, was fiercely protective of the vast Midlands motorcycle industry he’d known all his life, and had an encyclopaedic knowledge of veteran and vintage machinery. There can be few roads or country lanes within 100 miles of Birmingham that he hadn’t ridden test bikes along.

He knew the secrets in every manufacturer’s cupboard, and had the imagination to make those long-forgotten projects spring back to life with Lawrie’s amazing talents at the drawing board – and of all the ‘if onlys’ hidden away at Small Heath, Meriden, Redditch, Hall Green and so on, few were more intriguing than the four-cylinder shaft-drive, liquid-cooled 500cc Velocette racer that never was.

One might be forgiven for automatically linking Velocette with high-performance four-stroke single-cylinder machines, but the long-established factory also had the wherewithal to produce machinery such as the supercharged parallel-twin ‘Roarer’, the whisper-quiet LE, the Valiant air-cooled flat twin and the Viceroy scooter to name but a few – and racing was always in the blood.

Although this account is of necessity abbreviated, Bob took up the story in his slightly whimsical fashion in the May 5, 1960 issue of The Motor Cycle: “Gathering dust in the Velocette works at Hall Green is a 125cc engine which has a liquid-cooled cylinder barrel and head. The twin overhead camshafts are driven by a train of gears, one of which also serves to drive the coolant impeller, while another provides the take-off for the magneto drive.

“That engine was never fitted into a frame and, in fact, was deliberately so designed that the temptation to try it on the track was stifled from the start. Nor was it ever finished, although a further week or two of tool-room work might have seen it ready for the test bench. But interesting though it undoubtedly is, the 125 is only part of the story – only a quarter of it, indeed.”

Bob goes on to explain how in 1949, in a hotel lounge in Berne, Switzerland, Velocette’s racing and development manager Bertie Goodman (who by 1960 had become the firm’s sales director) bumped into Norton’s Joe Craig. The conversation soon switched to the fearsome Italian four-cylinder mounts, and Bertie asked: “How is the new Norton ‘four’ coming along?”

Joe gave nothing away – and in fact the planned multi never made it to the race track – but Bertie couldn’t resist joking: “Wait till you see ours!”

“Until then, wrote Bob, “no thought of a ‘four’ had even crossed Bertie’s mind, but back at Hall Green he got down to some serious thinking.”

He raised the subject with his father Percy, who started to sketch a much-modified, unsupercharged version of the prewar ‘Roarer’, but even before the general arrangement drawing of the revived twin had been completed, the Goodmans’ thoughts turned to a ‘four’.

Velocette decided to go ahead with the design of the power unit and cycle parts, and Percy Goodman started work in 1950, with the 1953 TT the target. By 1951 the initial layout was ready and detailing was under way, but with Percy now in failing health Bertie took over, to finish the work in 1952 and put in hand construction of the experimental 125cc engine – virtually the right-hand cylinder of the projected ‘four’, complete with the full-scale drive to the overhead camshafts. If 15bhp could be wrung from this little ‘single’, the racer itself might give 60 to 70bhp – more than enough for the time.

Then, within a week of the experimental unit’s completion, Velocette’s racing hopes were dashed, first by the death of Percy Goodman and then, after totting up the costs, the firm’s reluctant decision to withdraw from the racing scene.

“Still,” wrote Bob Currie, “what a machine that four-cylinder would have been. In the Italian manner, the engine was mounted transversely in a welded duplex tubular frame to obviate a lengthy wheelbase and nullify the effects of torque reaction. But there was also shaft drive, effected by a short primary shaft to the gearbox and by a longer final-drive shaft to the rear wheel bevels. The crankshaft was of the built-up type with pressed-in crankpins and with a large-diameter middle bearing.

“Total capacity was 498cc, and the bore and stroke were equal at 54.1mm. As the lengthy camshafts were driven from one end, they were particularly robust to overcome any twisting tendency. Each, too, had a hefty bearing in the middle.

Like the four-cylinder MVs and Gileras, the Velocette was to have coil springs, unusual in being conical, with the varying rate tending to damp out surge. The springs were encased in large-diameter tappet caps running directly in the light-alloy cylinder head.

The four carburettors had a cross-shaft to operate the throttle slides, and projecting rearward from the right of the crankcase assembly was a large replaceable-element Purolator oil filter. No separate oil tank was specified, and the oil was carried in an integral crankcase compartment.

“Most unorthodox of all was the transmission,” wrote Bob, “for obviously the necessary bevels could not be fitted at the extreme left-hand end of the crankshaft. Instead, there was to have been a short countershaft geared to the crankshaft and lying behind and parallel to it.

“The countershaft would carry the driving bevel, and so the primary shaft to the clutch assembly could be brought inboard. It could also serve to drive, through skew gearing, a gear-type oil pump suspended in the oil container.

“Parallel to the frame axis, the gearbox was offset to the left and inline with the transmission shafts. As in the LE and Valiant gearboxes, there were two shafts, with the input to the forward end of the lower shaft and the final drive taken from the rear end of the upper shaft.”

As Bob remarked, the design was all there, right down to the line of the four closely tucked-in exhaust pipes and megaphones to give a theoretical lean angle of 47 degrees – remember the tyres of those days?

Sadly, though, it was all yet another story of what might have been…