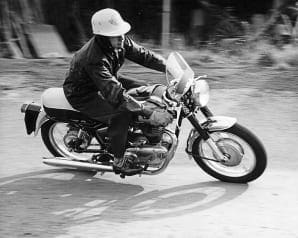 When Royal Enfield launched the unit-construction 250cc Crusader in 1956, followed by the tasty Crusader Sports a couple of years later, the Redditch concern was onto a winner.

By 1963 a five-speed, close-ratio gearbox had become the icing on the cake as two very different-looking models were launched – the Super Five and the Continental.
In The MotorCycle of July 12, 1962, the tester certainly seemed impressed by the Super 5.

“Had there been a London Show last year,” he wrote, “it’s a pretty safe bet that the Royal Enfield Super Five would have had the crowds fighting to get near it.

“Already the Crusader Sports had built up a strong following among those with an eye for a nifty two-fifty.

Now the Crusader unit had been pepped up still more, and there was an entirely new leading-link front fork; but above all a five-speed gear assembly, the first production job of its type in Britain, was incorporated.