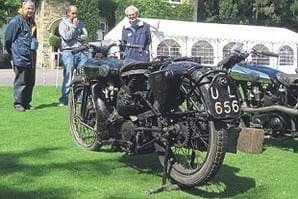 The machine used to be in Devon’s Coombe Martin Motorcycle Museum (now closed) and has been owned by the same family for many years. Although no longer in running order, it was pushed up and down in the rally cavalcade.

An old photograph showing Lawrence on UL 656 has a scribbled note on the back reading: “Talking to GB outside the original (Haydn Rd) works, February 1931.”

Club member Stefan Raetsch rode his 1938 SS80 all the way from Hamburg via the Dunkerque-Dover crossing, around 700 miles, and after arriving in the UK rode to Milton Keynes through no fewer than three thunderstorms, but the bike didn’t miss a beat.

The rally featured a run-out to the famous Hook Norton Brewery on the Saturday.

A total of 50 Broughs, including three cars, took part in the event, but the deteriorating Sunday weather put at least two people off.