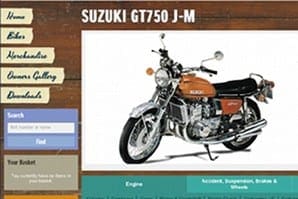 This is a machine that will deliver you from A to B with the minimum of fuss and drama at minimal running costs. What’s more it won’t break the bank in terms of initial outlay either. Running examples can be had with tax and ticket from £400 (yes four hundred pounds) and up. What you get for your money is probably the most underrated Japanese mid capacity machines of the period and essentially half of a GS750. Solid reliable transport with a no nonsense approach to getting on and doing the job in many ways it also aces the competition.

Physically less bulky than a CB400 Honda, more refined than Z400 Kawasaki and less set-up fussy than Yamaha’s worthy XS400, the GS just gets on with the job in hand. Perhaps it’s only foible is the typically quirky charging system endemic to Suzuki four-strokes of the period. However, if it’s still running now chances are any electrical issues were sorted out years ago.

Reliability wise this is a machine that Suzuki knew had to work perfectly out of the box and needed to keep on doing so. Although not massively important to the UK market, 400s were surprisingly big business across the pond where they were justly perceived as a jack of all trades. Cross town hops, commuting or a moderate long distance tour the 400 was capable of all this and more.

All of the big players coined in the greenbacks with their 400s and Suzuki had more to prove than many. Reeling from the RE5 rotary disaster the company could not afford any reliability issues. Therefore its entire, first off, four-stroke range had to be pretty much bulletproof. Know that the bike was the platform from which, ultimately the long running (up to 2006) GS500E was launched and you know just how sound the basis concept was.

If a barn find can be yours for £400 plus the cost of a service and new tyres how much more of a bargain can you want?