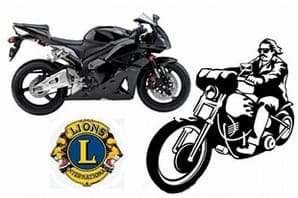 Star of the show at this summer’s Founders Day was undoubtably the 350cc overhead camshaft Sunbeam displayed on the Marston Sunbeam Register’s stand. Sunbeam built six experimental overhead camshaft motorcycles in 1925, five of 500cc and just a solitary 350 – this one. Refurbished about 15 years ago, it has been owned by the same family since the 1940s.

Other Sunbeams to catch the eye included the 1934 Model 9 of Carl Rear – Carl’s had his ‘Beam’ for about nine months and has clocked up 2500 miles on it. He’d ridden it the 80-odd miles from his home near Boston and reported: “I love it; I can’t stay off it.”

Stanford Hall wasn’t just ‘Sunbeamland’ though – many other clubs had pulled out the stops, boasting impressive displays, while there were a few oddities too. Sheelagh Neal’s Corgi-Scott stood out – the ex-paratrooper’s machine was fitted with a Scott two-stroke Cyc-Auto engine, dropped bars and racing seat, then painted blue like dad Ossie’s racing Scott outfit; it was ridden around the garden by all the Neal children.

Another oddity was a Norton ‘ES4’, a 1010cc V-twin based on two 500cc Norton ES2 cylinder heads and barrels on a common, home-made crankcase. The engine is apparently in a low state of tune, with just about 43-47bhp on tap, though with a little work, this could easily be 55-60bhp.

The autojumble was as extensive as ever; visitors had come from far and wide, with many there at the crack of dawn so as not to miss the bargains. There were trials demos too, while riders on a variety of machines took to the parade ring.