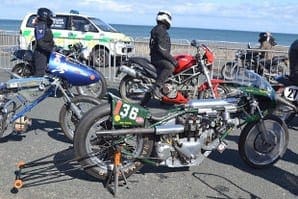 With anxious eyes on the Manx weather, which had been a concern, organisers must have breathed a sigh of relief as the sky was blue and the sun shone brightly for competitors and spectators when the event was held.

The ‘Run what yah brung’ nature of this event meant the noise and Castrol R was accompanied by a silent interlude as a bloke on a pushbike pedalled furiously down the track. Its owner Warren Davies – aka Captain Whizz – told us it is a single speed, 1932 Sunbeam. Either side of him though were much noisier machines… Read more in October’s Old Bike Mart. Subscriptions start at £7 for six issues. Can you afford to be without it?