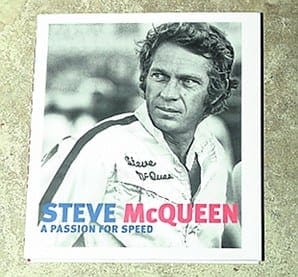 The movie industry was a 20th century phenomenon, it didn’t exist before 1900 and by 2000 the concept had changed to video and DVD. In the golden period of the talkies – which has to be the late 1930s to mid-80s and I’ll argue the toss with anyone on that – there were some iconic stars produced by the industry.

Of these stars few embraced our scene more than Terrence Steven McQueen. In an era when to sit in a fast car or on a powerful motorcycle did wonders for an actor’s image, McQueen not only sat in or on such machines but used them to their full. Racing – cars or motorcycles was ‘life’ to shorten his famous quote.

McQueen became one ‘of the lads’ when mounted on a motorcycle – be it a desert racer, mxer or enduroing in the ISDT. In A Passion for Speed the actor’s love for all things mechanical and horsepower – literally in the section on polo – shines through. The book is packed full of images of the star in action, with his racing buddies and training.

Not packed with text, meaning more room for bigger pictures, this is one for the general movie fan as well as those fascinated by McQueen’s motoring exploits.