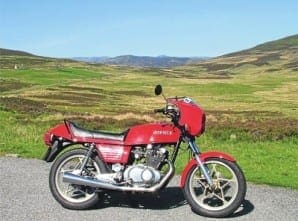 Honda had their CB range, while Kawasaki challenged them with their big Zeds, leaving two-stroke kings Suzuki and Yamaha behind. But not for long, by the middle of that decade Suzuki had come up with their answer in the shape of an affordable, practical and reliable four-stroke model. Titled the GS series it would go on to be a popular part of their range for many years.

They started small, with a 400cc twin, before introducing the 750cc version, and by 1978, they had their own ‘big four’ in the form of the GS1000. As an offshoot from the power struggle, 1980 saw Suzuki release a range of 450cc models, including the ‘S’, an example of which I was lucky to have on long term loan last summer. Quite a racy little number, both in looks and performance, the revvy twin was a revelation, as I’ve probably spent more time with old British singles than is good for me.

My first experience of Stan Williamson’s recently acquired GS was a round trip of about 400 miles to the Bracken Trundle on the west coast of Scotland, and it took most of the outward leg for me to get the hang of the quick handling and the howling motor. For someone used to British machines, fifth and the redline is reached incredibly quickly. The light-up gear indicator on the dash is a most useful tool and something Suzuki offered as standard at that time. I’ve often thought of them as gimmicks, wondering why the rider can’t count from one to six and back again, but on a machine where achieving the maximum performance is all about making the best use of the cogs, it’s handy little tool.

The handling, as I say, is nimble, and entices the rider to try that little bit harder, until some over-banding or a white line is encountered, and then the whole bike wriggles and kicks until it rights itself. I had mixed results from the brakes. I found, quite by accident, that the 271mm disc at the front can be gently applied during cornering and results in a bit of extra stability without any adverse effects, but there were one or two occasions when I inadvertently stomped on the rear lever, expecting the usual sloppy British response, which caused the wheel to lock and a small slide to ensue. Luckily these were in town at slow speeds and the only effect was to cause the car driver behind to back off a little.

For a model designated an ‘S’ for Sport, the riding position is quite upright, but the apparently well padded seat follows the sporty theme and is downright uncomfortable after about 10 minutes, although the owner reports it to be one of most comfortable bikes he’s ridden. Everything else about it is almost spot-on for my build; the small fly screen directing the wind up and over the top of my helmet and the levers and controls being easy to reach and operate. Everything, that is, apart from the horn button, which is difficult to locate while wearing thick winter gloves, and trust me, in Scotland in June, winter gloves were my first choice.

In terms of living with a bike, I’d be willing to bet that many of you carefully calculate the performance and MPG figures of a machine before purchase, but probably don’t give a second thought as to whether the handlebars are too wide to fit through the shed door, or the steering lock is good enough to allow you to squeeze past the corner of the house. My garage has a double door, so there are no problems on that score, but performing a three-point turn inside was a bit tight, which presented the opportunity for me to practice reversing down th e ramp and avoiding the cabbage plants, to get the Suzi out again.

Although it’s a physically small machine, I found it to be a bit top-heavy, and awkward to wheel around, but once on board, the weight spreads out and with a seat height of just 800mm (31.5in) I can happily get one foot flat on the ground in most situations, even though I’m only 5ft 1in and-a-bit. It’s the ‘bit’ that makes all the difference. As for looking after the GS, routine maintenance is easy enough and tasks such as checking the oil level and chain tension are as straight forward as on most other bikes.

The biggest problem I encountered was the replacement of the starter motor, which failed within a day of bringing the bike home for the long term test. The manual instructs the DIY mechanic to disconnect all cables, take off the cover and remove the two securing bolts to allow the motor to be lifted out. After many emailed photographs and phone calls to Stan, he decided to visit and fit the new motor himself. All I can say is that the air was a paler shade of blue and the language also quite colourful when he discovered that various other parts would have to be removed, including the cam chain adjuster, to allow the motor to be withdrawn.

The history of Stan’s bike is quite interesting. The ‘S’ model was never intended for the UK, and in the year of manufacture, this particular bike was purchased by a soldier serving in Oman. You wouldn’t necessarily think of Oman having a Suzuki dealership, but they did, and it was called Towell & Co. For reasons unknown, the Army Captain only kept the GS over there for a couple of years, before having it shipped to the UK – or to be more precise, to a village about an hour away from where I live.  There it lay in a shed, untouched until 1996, when it was sold to someone in Perthshire, and where, just recently, Stan Williamson came to know of it and quite fancied sampling something different to his British machines.

A lot of desert sand had to be removed from the tanks and even inside the tyres, but only a little light maintenance and the replacement of consumables was required to get the bike back on the road.

Being over 25 years old means it’s eligible for VMCC events and I received a bit of a mixed reaction at some of the ones I rode it to. With its striking and almost Italian red paint scheme, mixed with gold wheels, it’s certainly an attractive motorcycle, but once people see the name on the tank, the conversation can turn a bit negative. Which is a shame, as it’s quite a rare machine in the UK, and one that can open the door of classic motorcycling for those who have no desire to get their hands too dirty and develop the muscles of an Amazonian in their right leg. In fact, this little Suzuki has done just that. While the bike was in my possession, it gave a local club member, Iain, a chance to have a good look at it. He seems to be a bit of a Honda fan, judging by the couple of CBRs in his shed, yet neither are quite old enough to permit him entry to VMCC events. Just as I was finishing this report, a deal was done with Stan, and Iain became the proud owner of a practically unused 30-year-old motorcycle.