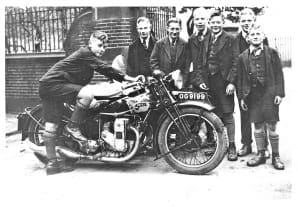 While little cannot already have been written about the Ariel Square Four, it takes only a brief look through the Mortons Archive to reignite the intrigue this distinguished British design has always generated, writes Pete Kelly.

Square Four evolution
In 1931 Ariel won the Maudes Trophy with an ingenious ‘Sevens’ test devised by the firm’s sales and marketing manager Victor Mole. This involved seven different Ariel models, and in one of the tests, seven schoolboys were each invited to kick-start a Square Four seven times. It started first kick on 48 out of the 49 attempts, and then went on to complete 700 miles in 700 minutes.
To say that the public unveiling of the overhead-camshaft 500cc Ariel Square Four in the autumn of 1930 caused a sensation would be a considerable understatement.

At a time still associated with soup kitchen queues, the Ariel’s appearance at the 1930 Olympia Motorcycle Show even out-posed the introduction of the Matchless Silver Hawk, and four giants of the British motorcycle industry – Edward Turner, Jack Sangster, Val Page and Bert Hopwood – each played a part in the story.