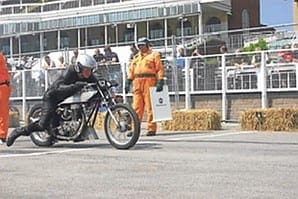 Many sprints are slowly disappearing and Blackline being a supporter of the Aintree Motorcycle Racing club decided to run it again following on Blacklines success of running the Houghton Tower Sprint near Preston.

The event will encompass the sprint which is a quarter mile running down the old GP circuit in front of the Grand National stands.

• Meanwhile road safety charity the Institute of Advanced Motorists is offering advice for anyone thinking about riding on French roads this summer.

“In France all drivers and motorcyclists, excluding mopeds, need to carry a breathalyser kit, with two disposable breathalysers,” he said. “The breathalyser must meet NF standards, similar to the BSI here in the UK, and carry an NF certification. The French government has postponed the fine for noncompliance but you still have to have one.

“Remember too, that the drink drive limit in France is lower than in the UK, 50mg compared to 80mg per 100ml of blood. If you’re driving, don’t drink, and beware the ‘morning after’ effect.

“On-the-spot fines or ‘deposits’ in France are severe. An official receipt should always be issued. Vehicles parking contrary to regulations may be towed away and impounded. Holders of EU driving licenses exceeding the speed limit by more than 40kph will have their licences confiscated on the spot by the police.

“You are required to carry a warning triangle, reflective jacket, and convert your headlamps when driving in France. It is recommended that you carry spare light bulbs if you can fit them easily.”

He said it was also important to take regular breaks when driving on the right hand side of the road on unknown routes.

“Always have a rest if you’re getting sleepy,” he said. “Also, while radar speed camera detectors are legal in the UK, in France they are illegal whether or not you are using them. This legislation includes sat nav systems which show speed camera information.”