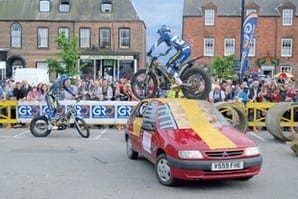 Visitors had a thoroughly enjoyable evening admiring the bikes of all shapes, sizes and ages that had poured into town, with lively local rock band The Tuesdays, who performed in the central car park, and a brilliant trials display course adding to the fun.

Joining the hundreds of bikes that arrived from a wide local area were those from as far away as Derbyshire, Nottinghamshire, East Yorkshire and Norfolk.
Last year, one couple who’d come across from Zeebrugge, Belgium, for an English holiday found themselves mingling with the Spilsby Bike Night crowds by sheer chance. They’d enjoyed it so much that, this time, they deliberately planned their English holiday to coincide with the event.

Local shops and cafes remained open all evening, and with stands set up by charities including the Lincolnshire Air Ambulance, LIVES (the Lincolnshire Integrated Voluntary Emergency Service), Blood Bikes and the Joey Dunlop Foundation, together with police road safety and the local fire brigade, the streets were abuzz with activity.

Organised by Pete and Lisa McDowell from Wildman’s Motorcycles & Scooters of Spilsby, no stone was left unturned in the planning that had started last summer.

Components for the course were assembled at nearby Gavin Motley Engineering, and at 2.30pm Gavin arrived in town with a tractor and heavily laden low-loader followed by another tractor with a front loader. He and Pete then spent the rest of the afternoon setting everything up in time for the first trials display at 6.30pm.

With lots of help from East Lindsey District Council, volunteers and the local police, Pete and Lisa McDowell have organised the Spilsby Bike Night since the first one in 2009, when a guest appearance by former road racing ace John Cooper helped to swell the crowds.

Lisa had worked well into the previous night making home-made cakes and preparing their bike shop’s Triumphs Café for the Bike Night onslaught. For Pete, the Tuesday began at 6.30am as he posted various signs around the town, then went over to Motley Engineering, where finishing touches were being made to the trials course obstacles.

By early afternoon he was cordoning off the car parks just as the first trickle of riders arrived, and just a few hours later he was commentating at the trials demonstrations and filling young Adam Moorwood’s cap with a collection from the appreciative spectators. Adam then poured all the money into the Air Ambulance bucket with Spilsby’s mayor looking on. Pete was still on the streets at 10.30pm clearing up.

Wildman’s Motorcycles was started in 1926 by Ted Wildman, his son John taking over in 1969 when Ted died. Pete and Lisa took over the business when John retired in 2006, adding an adjacent shop that had stood empty for some time.