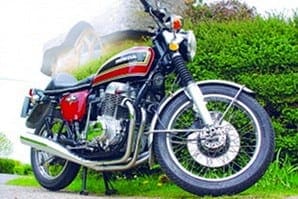 The ‘CBX 2014’ calendar shows off the most successful six pack in the annals of the motorcycle in all its facets on 13 stunning photographs.

Ruedi Imhof not only owns these bikes, he also rides them. The thrilling action shots show the Swiss national on his first-generation CBX and on the evolution model, which thanks to its monoshock design with progressive linkage system was called Pro Link and featured a fairing and saddlebags for longer tours. Ole Carlsen’s CBX Pro Link takes the centre stage in front of another technical masterpiece – the Öresund Bridge.

California native Jason Len, built an exclusive and unique bike around the unmistakable CBX big block, complete with Spondon frame and a Union Flag paint scheme. In addition to a host of other modifications, Mike Common from Canada adapted the swingarm and damper of a modern superbike to the CBX.

German national Klaus Schwarzer built his own dream bike with a rigid frame around the wide six-cylinder engine. Tarmac Custom Motorcycles interprets the CBX as a Spartan brat-style bike. A different version of the legendary Honda is demonstrated by Michio Sato from Japan with his red-metallic CBX with six-into-six exhaust and handlebar fairing.