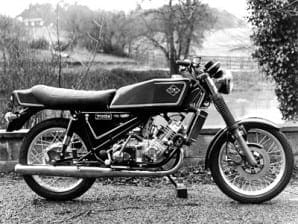 The Silk is a water-cooled two-stroke twin of 700cc capacity, built by George Silk in Derbyshire between 1975 and ’79 the production run was reckoned to be less than 150.

Silk raced and tuned Scotts during the 60s and felt that a motorcycle based on the Scott principle would be a good machine. Within the constraints of a very small manufacturer this proved to be true. Using his Scott experience, Silk had developed a series of modifications to uprate power, reliability and lubrication.

Encouraged by this, Silk produced a small batch of Scott-based specials using Spondon frames and suspension. Spondon is Derbyshire based too and its stiff, triangulated frames for Japanese two-strokes were almost ideal for the Silk engines. With these machines well received, work went ahead on redesigning the Scott engine with a special scavenging system matched to special silencers and state of the then art ignitions. What was produced was powerful, smooth and despite being a large two- stroke, economical.

Performance was enhanced by a minimal weight of a tad over 300lb –  compared to some monster machines being produced in Japan, this was featherweight stuff.

There were practical features too, such as chain enclosure but sadly, the public were tired of British machines and went oriental. They remain attractive, good handling machines; try one if you’re offered a chance.