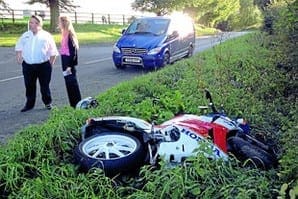 A survey by a price comparison website found one driver was involved in an accident after claiming they saw an unnamed celebrity walking along the street. The ‘celebrity’ turned out to be a normal member of the public.

Paul Gilbert, customer services director of InsureAnts.co.uk said some road users’ shocking ignorance of the Highway Code and lack of basic driving skills was forcing up insurance premiums for other drivers.

“We never cease to be amazed by some claims,” he said. “It’s almost as if some people pass their driving test and immediately forget the basic rules of the road.”

Among the claims revealed by the survey were:
• I was changing a CD and I didn’t notice the bend in the road. I ended up sideways in a field, and walked out through the hole where the windscreen was, listening to Led Zep.

• I thought I saw somebody famous walking down the pavement, and took my eye off the road, causing the crash. Mr Not A Celebrity saw the accident and kindly agreed to be a witness.

• The other driver said he was too busy looking at the map to notice that he had gone the wrong way on a one-way street.

• I was trying to swat a fly with the ice scraper and didn’t see the other car.

• The other driver said they had just driven off the ferry after a week in France, and forgot to drive on the left.

• I saw somebody getting undressed in their front window, and crashed through their wall.

• We were driving up to the traffic lights just as they turned red, and pressed the accelerator instead of the brake pedal.

• I saw a police car, panicked, and drove on the pavement by mistake.

• I was driving along a country road and the pollen from a nearby field made me sneeze and I ended up in a ditch.

• The other driver was too busy putting on their make-up to see me coming the other way.

• I was practising what I'd do in the event of a car crash, and crashed.