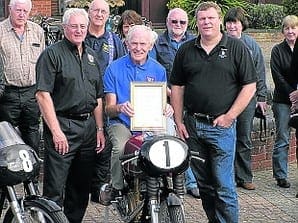 Sammy Miller received another honour recently – one to add to his MBE and hundreds of trials and race wins – when the AJS and Matchless OC made him an honorary member. Club PRO Roger Limb and club chairman Rob Swift went to the Sammy Miller museum at Bashley Manor, New Milton which houses many a finely restored AMC machine, to bestow the honour on Mr Miller.

Though probably most famous for his trials exploits against the AMC works teams, it must not be forgotten that Sammy’s racing career also included bikes like the AJS 7R.