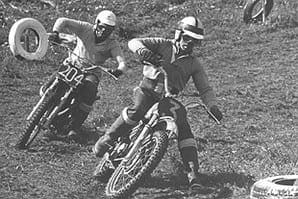 Born on June 21, 1941 Robbie’s formative years were in the Aberdeenshire village of Garlogie and his early motorcycling exploits were with the Bon Accord MCC in Aberdeen. Robbie lived a life packed full of motorcycling achievement both as a rider and organiser while retaining an enduring enthusiasm for two and three wheels. On road, off road, slow or fast, there wasn’t an aspect of the sport not tried by Robbie, generally with a deal of success and once the Allan mind was made up to do something, that ‘something’ got done. Take his entry into the Paris Dakar, aged 65, when lesser people have given up active competition as a ‘for instance.’

Robbie’s legendary organisational skills were honed long before engines powered his two wheel exploits as he had pedal powered events organised in the village for brothers, friends and himself. Robbie transferred these skills – skills which translated as deciding what needed doing and finding the best person to do it – to the motorcycle sports world, organising scrambles and trials and then on to shows where he could count launching the Scottish Motorcycle Show as one of his achievements.

However, latterly, it must be Tinto Park Moto track that he was most proud of and it was at this facility, on August 19, a crowd that looked like a who’s who of Scottish motorcycling joined Robbie’s family in celebrating his life.

Robbie is survived by his wife Margaret and their three children Robbie, Jennifer and Olive. He was laid to rest at Kintore Cemetery on Tuesday, August 20, 2013.