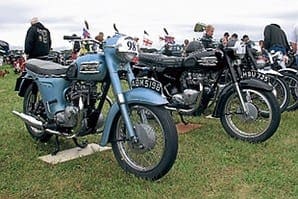 The research by MoneySupermarket found that a third of riders don’t realize some EU countries such as France and Italy reduce the speed limit when it’s raining.

Nearly half didn’t know that your licence is automatically confiscated if you’re caught driving 24.8mph (40kph) over the speed limit.

Only one in six were aware that French, German and Italian police will fine you on the spot for speeding. Money Supermarket spokesman Peter Harrison said: “As soon as your wheels hit European soil, Continental driving rules will apply to you.

“Speeding is probably one of the most likely offences that motorcyclists will be caught out for when on European roads and it’s essential that riders are clued up on the rules and regulations for the country they plan on visiting before setting off.”

The survey also found few Brits knew which EU countries operate a zero tolerance police to drink driving, and few knew that some insurance companies will automatically downgrade a policy to the bare minimum when the insured vehicle is being driven in Europe.