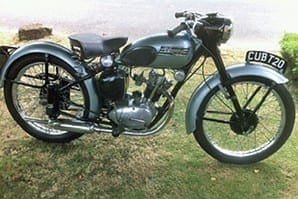 Nigel has already posted an advertisement on eBay offering a £500 reward for the safe return of his bike, which carries the frame number 17384 and engine number T12017384.

He says the Cub, stolen from a lock-up in Wendover on October 1, has a reconditioned original Amal carb and the right-hand fork seal weeps a bit.

• Meanwhile police are appealing for help after thieves stole a Velocette being restored by a 93-year-old from Sunderland.

OBM reader Fred Readman contacted us about the theft which happened on October 2.

Northumbria Police’s Insp Tony Carty said: “I urge anyone with information about where the bike might be, or any information that can help with our enquiries, to get in contact. The owner would very much like it returned.

“A lawn mower and petrol strimmer were also taken, and burglars should be warned we are doing everything we can to stop their offending and taking action against them to make sure they’re put before the courts.”

OBM readers should take a careful look at the accompanying picture (top) in case they get any suspicious offers or spot it at an autojumble.