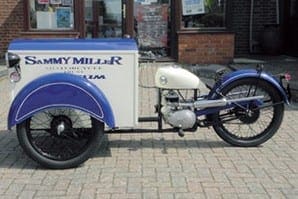 Powered by a 122cc Villiers two-stroke engine with a three-speed gearbox, the 1947 Dot ‘Devoid of Trouble’ motorcycle vehicle delivery truck, to give its correct description, was popular for bread and ice cream deliveries, and its price ex-works was just £143. It would have taken quite a few three-helfpenny ice lollies or threepenny wafers to pay that back!

There was space on the original ice cream tub versions to place a large brass handbell and vinegar bottle-style ‘raspberry’ dispenser.

Another brilliant restoration is that of a 1954 250cc Panther Model M65 made by Phelon & Moore Ltd in Yorkshire. Weighing 375lb, it has a four-speed Burman gearbox, Panther front forks and Lucas electrics, and the 71mm bore by 88mm stroke motor produces 15.5bhp at 5500rpm.

Made in Turin, Italy, the 1959 50cc Itom Super Sport that’s also just been completed has a left-hand, three-speed gearchange and large 20in wheels. Well remembered for the ear-splitting noise it produced from that open megaphone, it was very popular and successful in 50cc racing in the 1950s.

It is open to all motorcycles and three-wheelers manufactured before 1980 and takes place on Sunday, August 24.

Participants will be waved off by clerk of the course Percy Gosling (10.30am for three-wheelers and 10.45am for the rest) to enjoy a run of 56 miles through the lovely New Forest area.

Following on behind will be Bob Stanley in the recovery van. Riders will stop for lunch at the Elm Tree Inn, Hightown Road, Ringwood, Hants BH24 3DY.

After lunch, everyone will return to the Sammy Miller Museum complex, where they will receive their awards and finishing plaques.

For those who don’t wish to participate, there will still be lots of interesting bikes to view and to listen to as they’re fired up.

The museum, Bashley Tea Rooms and gift and craft shops will be open all day.