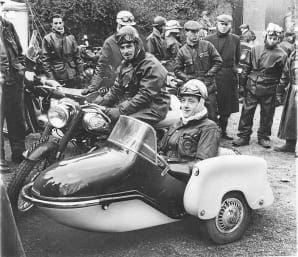 Organised by the Conway Club in February 1962, the pioneering Dragon Rally had been heralded in the motorcycling press, particularly Motor Cycle, as a great international gathering of like-minded riders who would flock to North Wales in the spirit of Germany’s Elephant Rally no matter what the wintry weather might bring.

Eddie writes: “My late wife Kit and I were accompanied by one of her relatives, John, with brother Mick on the pillion of his Triumph twin, and one of the accompanying pictures shows Kit and Mick looking frozen near the Dragon’s Lair.

“We arrived at the castle with only the most basic of camping gear – no sleeping bags, just blankets; a tent that was just bigger than a play tent, and only a small Camping Gaz stove for warmth.

“During the evening, most of the campers huddled around the big bonfire, but there was plenty to eat and drink, and lots of friendly banter all round.

“Snow was forecast, and we didn’t get much sleep because it was so cold. To add to it all, there was drama during the night when shouts and yells started coming from the next tent.

"Some young lad had been reading a magazine by candlelight when the candle fell over and set fire to the side of his tent. After the fire was put out, he slept in a sidecar!