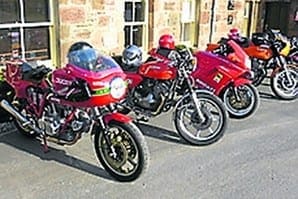 Continuing on from the successful Border Revvers weekend in May, the event attracted just under 30 classics across a decent range of manufacturers including Laverda, Moto Morini, Moto Guzzi and Ducati. The base for the weekend was Dingwall, set in the beautiful coastal scenery of Ross-shire and Sutherland, with great biking roads and several famous distilleries producing excellent single malt whiskies.

The Saturday itinerary saw the group enjoy 150 miles of beautiful roads punctuated by stops at four distilleries. The first stop at Balblair included a simple Motogiro-style observed trial section, something which was very popular and which will become a more regular feature of MacGiro events in future. Sampling of the local produce was deferred until dinner in the evening though, and it was worth the wait too!

Next stop was a pleasant little surprise for the band of MacGiroisti – a brief track session at Golspie kart track, which was great fun, although definitely more suited to the smaller bikes than long-legged Ducati bevel twins. It was great to see Ducati, Laverda, Moto Morini and Moto Guzzi bikes all whizzing round the same track. And since the Scots love the sound of the pipes no MacGiro event goes by without a prize for best-sounding bike, which was won by Ian Downham on his Ducati Darmah.

After a good lunch stop in Tain it was off to Glenmorangie distillery for an interesting barley to barrel tour, led by Brian Gilmour, a Ducati enthusiast himself. In biking gear the temperature inside the distillery was very Mediterranean, and the atmosphere sublime!

Two more stops at Muir of Ord and Dalmore distilleries rounded off the day before returning to base and preparing for dinner at the Tulloch Castle hotel in Dingwall. A talk on whisky tasting followed from John MacDonald of Balblair distillery, who very supplied two excellent Balblair malts to sample.