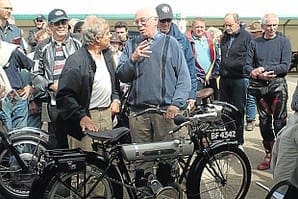 Part of the charm of the 32nd Carole Nash International Classic MotorCycle Show the diversity of the machines. It is true that if 20 enthusiasts were asked to ‘define a classic’ then it would be more than likely that 20 different definitions would be received. For some it will be anything from Meriden, for others it will be Armoury Road where the best motorcycles come from. The discussion turns more heated when the subject turns to which country made the best motorcycles. That’s one that isn’t for this little feature and it is suffice to say that classics from all countries are welcome at Stafford. It must be said that, for the April show, the emphasis is more on British machines but no matter where your interest is there’ll be something to see.

Star names as special guests
Giacomo Agostini – possibly the world’s greatest motorcycle racer – is to be joined by eight-time world champion Phil Read and John ‘Mooneyes’ Cooper – with whom he famously did battle at Mallory Park in 1971 in a race which has rightly gone down in racing folklore – in a racing spectacular event at the Tillington Hall on Saturday, April 28. Billed as an ‘audience with Ago’ the evening will no doubt be a lively and exciting one as Ago, Readie and Mooneyes relate tales of the race battles in the 1960s and 70s. There are still a few tickets remaining priced at £25 per head. For details call 01507 529529 or email customerservices@mortons.co.uk

Ago will no doubt be a feature of the Grand Prix paddock up near the Classic Dirt Bike Experience hall, where the best of classic race bikes are fired up to bombard the eardrums of enthusiasts. These live displays are the nearest most of us will ever get to reliving the sounds of the 1960s GP race paddocks when Hondas howled, Yamahas yowled, Suzukis screamed and Brit bikes boomed.

In the Classic Dirt Bike Experience there will be the best of trials, scrambles, MX and enduro machines from all eras, displayed so they can be easily viewed. Owners will be on hand for chats as we all try and get our own projects sorted. Also on hand, with some extra special machines, will be multi world trials champion Yrjo Vesterinen. Vesty will be bringing three Bultacos – one of them his actual world championship winning machine – and two others under the guise of unfinished business.

In the early 1980s, Vesty was riding a Comerfords 340 Bultaco in the British championship but found himself being hard pressed by a young lad called Steve Saunders on a Comerfords 250 Bulto. Vesty has always wondered about the contrast between the 250 and 340. Was a 340 really necessary? What would it be like to pit the two bikes against each other in a test? Thirty years on, the Finn owns both machines and will be conducting this test at Stafford, outside the Classic Dirt Bike Experience.