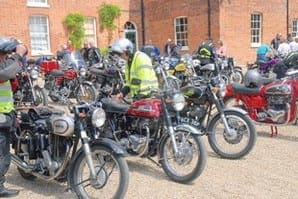 Highlights included a mass ride-out on the Saturday to the Gressenhall Farm and Workhouse Museum of Norfolk Rural Life near Dereham, a barbecue and evening entertainment and a display of bikes from a new local Norton dealership.

The event attracted every kind of Norton imaginable, from International and ES2 singles to Dominators and Commandos, some sparkling cafe racers and a sprinkling of rotary-engined models.

Ken Perch’s 1947 M40 plunger 350cc racer attracted the attention of many passers-by as it stood alongside his mobile home. It was ridden by Dennis Langton in the Manx Grand Prix from 1948-5, and Ken parades the Norton regularly.

One late arrival, while most rallygoers were out on the Saturday run, was Jason Bean, with dad Geoff on the pillion of the red, white and blue 1977 850 Commando that he had finished only the day before.

“I bought it from a dealer who’d found it in a barn,” said Jason. Since then the bike has had a top end rebuild and been fitted with electronic ignition, a 34mm Mikuni carburettor and a four-brush conversion on the starter motor. The front master cylinder has been sleeved down to give better brakes, and Hagon alloy wheels and stainless steel spokes has put the finishing touch to a cracking restoration.

At the far end of the field, Stu Rogers had a trio of very interesting Norton International specials on show. The first had JABS written on the bright red fuel tank, and has a fascinating history that’s too involved to go into here. In 1950 it belonged to Phil Webb, who raced it for a season before he and a friend, Harry Bostock, built a brand new small-diameter tubular cradle frame for it along with special girder forks based on the geometry of the works Manx Nortons at the time (which, surprisingly, the Norton factory willingly gave out). Special alloy petrol and oil tanks, and a rear wrapround aluminium fairing, added to the bike’s distinctive character.

The other bikes were a lowboy-framed sprinter whose 580cc, 13½ to 1 compression engine runs on methanol, and a straightforward 1937 racing International.

On a showroom-smart 1956 Norton Dominator 99, a model he reckons was “the last real Norton ever made,” Pete McDermott had travelled from Hampshire and was enjoying every minute of this great social event.