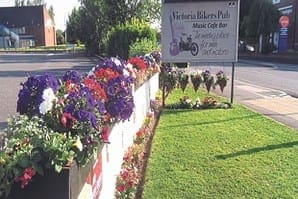 Full details of the garden, the pub and all the motorcycling activities that take place there are available by visiting www.vicbikerspub.co.uk

It takes place at the NEC, Birmingham, from November 22-30, and will feature everything from sports bikes and scooters to adventure models and off-roaders.

• Classic Transfers Bob Derrick dies
We are sad to report the death, after a lengthy fight against cancer, of Bob Derrick, who along with his wife Marcia traded as Classic Transfers, an important supplier to vintage and classic motorcycle enthusiasts.

With customers scattered right across the globe, Bob will have been known to many Old Bike Mart readers.

• HGV single-carriageway limit raised to 50mph
Overtaking slow-moving heavy goods vehicles that are limited to 40mph on single-carriageway roads might not be such a problem for motorcyclists, but frustrated motorists overtaking recklessly in the opposite direction certainly can be!

The Road Haulage Association has welcomed the news that the speed for HGVs on such roads will be raised to 50mph by next April, and so
should we.

RHA chief executive Geoff Dunning said: “This decision by ministers, based on evidence, will be welcomed strongly by hauliers and their drivers. The current limit is long out of date, and the frustration it generates causes an unnecessary road safety risk.”