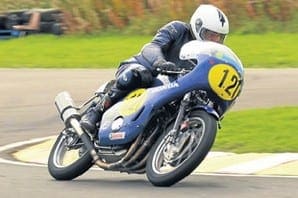 He won the title in a close fought and  final race of the championship year. Frank who has been crossing the North Sea from Holland to compete at the NEMCRC meetings at Croft for the past five years was delighted to have clinched the championship in the final race from his friend and close rival by just 12 points with Dave Martin in third place.

Frank commented: “You get two practice sessions and five class races over the weekend here. This is good. The club is friendly and it is very enjoyable experience. I will be back next year to defend the title and hope to bring back some of my fellow Dutch Classic Riders.

• Make a date with the Moidart Run
Details of next year’s Moidart Run in the Scottish Highlands have been revealed.

John McCrink says it’ll take place the day before the Pre 65 Scottish, making the date Thursday, May 1. As usual it is open to any pre 1979 motorcycle and starts at Viaduct Car Park, Kinlochleven.

It will follow the usual route, taking in the Devil’s Staircase. The emphasis on old bikes, scenery and camaraderie but is limited to 80 entries on a first come, first served basis. Entries close on February 28, 2014, or when it’s full – whichever comes first.

The show, on Friday, November 8, 5pm-9.30pm and Saturday, November 9, 10am-4pm, is not to be missed, all the best Japanese and British marques will be there.

Organisers are putting on a special display of racing 250s – the bikes that gave us that fabulous fast and close racing. Special guests will be in attendance.

The great Ballymena autojumble will be incorporated within the show, with all the leading autojumblers entered.

A special invitation is extended to all motorcycle enthusiasts to support this great classic bike show and autojumble. Admission £5.