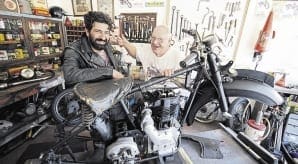 After selling more than half-a-million motorcycles in the last financial year, Royal Enfield has announced its best-ever results for a 12-month period.

More than half-a-million bikes in a year – Royal Enfield’s best financial results ever
After opening a new Royal Enfield store at Mitcham, Surrey, last year, RE’s CEO Siddhartha Lal (left) attended the Goodwood Revival meeting where an authentic 1960s RE dealership was housed in a marquee. Maurice Mumford (right) who worked at RE’s Westwood plant in the 1950s, was there to offer advice as mechanics fettled a 1949 Model G in front of the crowds.
Between April 2015 and March 2016, the firm sold a staggering 508,099 motorcycles against 331,169 in the same period last year – a growth of 53.4 %.

In the three months to March, Royal Enfield also posted its best-ever quarterly performance by selling 148,185 motorcycles, representing 59.6% more than the 92,845 machines it sold in the same quarter in 2015.