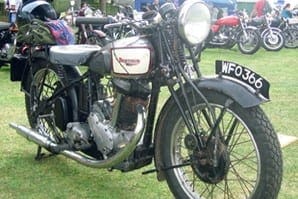 Built from surplus War Department Light Railways equipment, the 2ft gauge light railway opened in 1919 to transport the high-quality sand that’s still quarried in the area to the main line. After a life span of exactly 50 years, it closed in 1969 when the quarries switched to road transportation.

It was taken over by volunteers who now run it as a heritage railway, and the collection includes several locomotives and other items that actually worked on the supply lines to the First World War trenches and survived.

Among the bikes noted by John Wallis were a rare 500cc Panther M95 owned by Rollo Turner, who rode it to the event from High Wycombe. Only 300 were built, and of the 11 or so that still exist, only four remain on the road. The recorded mileage of 60,000 could be original.

An unusual feature is the sheer number of fixing studs securing the cylinder to the crankcase.

Another bike that caught the eye was a well-restored Velocette Venom ridden by Bryan Slingfield from Flitwick, which looked good and sounded great.

A rarely seen 1965 Villiers twin-powered DMW Deemster scooter, ex-police, which still has some of the patrol fittings, was ridden from the Heathrow area by Derek Titchmarsh, who’s had it for 20 years. The Deemster took pride of place on the DMW stand at the 1963 Earls Court Motorcycle Show.

Ridden from North Crawley, near Newport Pagnell, Terry Potter’s 1938 Norton 16H was bought as a box of bits, minus gearbox and other parts, 13 or 14 years ago, although the engine and frame did have matching numbers. Its final restoration is a credit to Terry, who’s had it back on the road for 18 months.