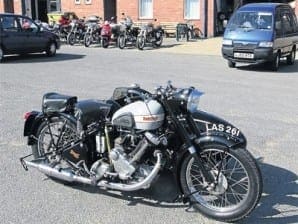 I can’t really claim any credit for the way the bike looks, points out Bill Moore, current custodian of this Panther 100 and sidecar. “The condition of the bike is all down to Ian Bone who actually carried out the restoration to the standard you see.” Bill bought the bike at auction in 2007 when Ian’s wife fell ill and the couple thought they would have to move, so reluctantly sold the machine along with enough spares, “To keep it running forever and all the special tools that are necessary.”

Ian has been a lifelong Panther enthusiast and rebuilt this one with the aid of a retired engineer friend from one and a half bikes. Using the best bits, remanufacturing what wasn’t there and improving some of the parts that were, it was a labour of love. A heartfelt letter that Bill has from Ian really shows the passion he had for this particular beast and is the reason that Bill refers to himself as current custodian rather than owner.

Phelon and Moore’s big cat has long been considered a sidecar tug, so much so that it is thought slightly eccentric to ride one solo. Available in two sizes ‘big and bigger’ Bill’s machine is the Model 100, the 598cc ohv single, with a bore of 87mm and a long stroke of 100mm with the tall engine taking the place of frame downtubes at the front. This means that the cylinder is at an angle of about 40 degrees which coupled with a small carburettor set parallel to the ground gives the same angle of up draught. Not a good recipe for high power output!

What the big engine does provide is good pulling power with a flat torque curve of 22lb-ft produced from 3500rpm. Power output was a lowly 23bhp but you needed to be spinning at 5300rpm to achieve that, according to my calculations the piston speed is 28.97 ft/second with over 175 changes of direction, it starts to look as if it needs the chassis to hold the top on! If this starts to look like steam engine technology that is hardly surprising as the ‘M’ of P&M was Richard Moore who was indeed a steam engineer. The ‘P’ was Joah Carver Phelon, a truly Victorian name, who before designing the long stroke engine had a wire drawing business for the textile industry.

Phelon retired in 1922 and Moore now partnered by Bertie Marians continued with bike manufacture using the Panther name. Granville Bradshaw was engaged to design what was to be the company’s first ohv engine, later refined by Panther’s own designer Frank Leach. This became the definitive Big Pussy, to remain basically unchanged until the model’s demise in 1967 as the 645cc Model 120S. Bill’s machine dates from 1958, “It’s one of the last rigid frames to be made”, he pointed out, “Rigid production actually finished in 1957, so it obviously sat around for a while. I’m a great fan of the lines of a rigid bike.”

Sprung frames were looked upon with suspicion by the diehard sidecar man of the 1950s as with the, often huge, coach built chairs of the day the bike’s suspension would dip while cornering. Bill’s Panther is helped in the comfort department by an extra bit of padding in the sprung saddle courtesy of Leighton’s. It really does make a difference.

P&M produced their own sidecar chassis, giving the rider interchangeable wheels and even a spare attached to the built-in towing hook. Bill’s however is fitted with a rigid Canterbury chassis, the body mounted on semi elliptical springs to give the passenger some comfort. “It didn’t seem right having a rigid bike and a sidecar with suspension.” It does make for a very minimalist outfit though and not one for the rider with a family.

When Bill bought the chassis it was furnished with a tradesman’s box sidecar, but now is adorned with a Charnwood Meteor. This is to my mind one of the most elegant bodies ever made, with good reason too. The original mould for the body was taken from a Second World War Mosquito fighter, bomber’s long range fuel tank. A cockpit was cut into what, on the plane, was its lower surface, it was turned upside down and a seat fitted, well it was almost that simple. The original tank was wood so the moulds required rather a deal of fettling. The wooden body from which all others came found its way to America where it adorns a Vincent Twin.

The cycle is peppered with little touches to make life easier like the polished bicycle pump, the spark plug holder and, the one Bill likes most, the magnet fixed on the end of the oil dipstick. “All of these are things that Ian Bone added”, he adds. One useful modification that Bill has made however is the fitting of indicators. This was undertaken by Steve Ward at Charnwood Classic Restorations, the indicators themselves are the small LED type as fitted by the owners of modern bikes who wish to junk the standard items.

The bike ones are mounted conventionally front and back, but Steve has integrated a pair of indicators onto the sidecar mudguard very neatly. Mounted back to back alongside the period Lucas sidecar lamp the type with one bulb and red and clear lenses serving both front and rear, Steve stowed a 12v battery from a kick-start Enfield in the sidecar’s boot to power them, “It should last for ever, but I’ve put an Optimate lead on it so that Bill can charge it easily”. Also recent is the signwriting on the sidecar. “My father was a fly-fisherman and made his own split-cane rods, the chap who did the lettering was an angler, so he accepted one of dad’s rods as payment.”

So, ‘what’ll it do mister?’ Pull like a train that’s what, that flat torque curve really makes itself felt and the gear ratios certainly suit sidecar work. Perhaps the only fly in the ointment is the weak feeling clutch, although I did notice that when Bill had Kate as passenger he pushed off from a standstill with his right foot, just to get the plot rolling. The exhaust note is fantastic and is truly unique, a very deep booming yet certainly not too loud. The reason for this is that Bill has kept the twin silencers just as it left Cleckheaton, many sidecar owners would blank off the left-hand exhaust port and run a single silencer on the outside.

Of course the ride is good on the smooth surface at Charnwood’s base – the bike was at that time neither taxed or MoT’d – but a rigid is going to be anything but on today’s potholed roads. Bill does however say that it is the best handling outfit he has ever owned and he is perhaps more qualified than most to compare handling characteristics as, in addition to the Panther, he currently owns a Harley and Meteor and a BSA M21 with a tradesman’s box attached. Eccentric? Quite probably!