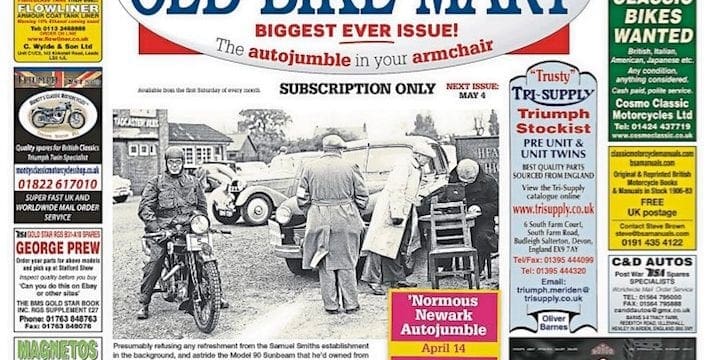 I have just realised that there is a small, but significant, error to the write-up to the Morton’s Archive picture on the front cover of the April issue.

The rider of the Sunbeam, is I believe, Bob Lowe not Rowe, a one-time specialist in Long Distance Trials. Bob ordered the Sunbeam direct from the factory to his specification for LDT use.

Bob lived in Edgware, north London, and I well remember the oil stains to the parquet flooring in one room of his house where he fettled the bike over many years.

Bob was married to Doris, an ACU lifetime honorary member and stalwart of the Dunstable and District MCC and South Midland Centre.

Following Bob’s death, and the Sunbeam standing idle for many years, Dunstable club member Bill Price, who at the time was working at Vauxhall in Luton on the Historic Vehicle Collection, re-commissioned the bike and subsequently rode it in several Banbury runs.

Doris bequeathed the Sunbeam to the Beaulieu Museum, I just hope it is still there and has not been sold on.

I hadn’t even opened the April 2019 issue of Old Bike Mart, which arrived on my doormat this morning, before I spotted this one.

To be fair and in your defence, you are only repeating the same error that was made the last time this photo was used in print by Mortons.

The gentleman astride his Sunbeam Model 90 on the front cover of this issue of OBM was called John ‘Bob’ Campbell Lowe, not Rowe.

His Model 90 was unusual in that it was fitted with high level exhausts – remember Sunbeam would do whatever the ‘discerning gentleman rider’ wanted.

The ‘Bullnose’ tanked Model 90s were made by Sunbeam in 1927 and 1928, but ‘Bob’ Lowe’s was a very early one, being first registered on December 3, 1926, and naturally has very early frame and engine numbers for this series.

This machine was restored by Bill Price c.1975 following Bob’s death and was featured in Motorcyclist Illustrated in October 1976 and The Classic Motorcycle in November 1985.

The bike was displayed on the VMCC stand at the 1979 Motor Cycle Show at Earls Court and, in later years, was sold by Verralls in March 2006.

It is still going strong and is well used and enjoyed by its current owner, and has appeared at Banbury on quite a few occasions over the years.

Keep up the good work. I’ve enjoyed OBM for more years than I care to remember.

Read more Letters, Opinion, News and Features in the July 2019 issue of OBM – on sale now!