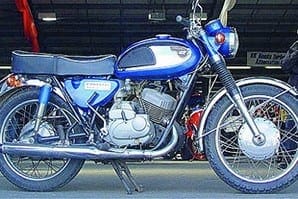 Expansion chambers and disc valves rapidly transformed firstly his Suzuki sponsor’s race machinery, which aided the defection, but not long after the road-going products of Bridgestone Kawasaki and Yamaha benefited as well.

Everyone will undoubtedly have their favourite of the period but inarguably Kawasaki’s 250 A1 Samurai and 350 Avenger must be some of the best and most accessible of the genre.

Running from 1967 through to 71/72 the disc valved two-stroke twins are some of the best of their kind to ever leave Japan. Making the most of the asymmetric port timing conferred by the rotary inlet valves the bikes were devastatingly quick. The Samurai was quoted as delivering 31bhp at the crank while the Avenger (actually 338cc) was listed at 41bhp. Even allowing for marketing speak both machines were substantially ahead of their peers in terms of power. What also makes the bikes exceptional then and now was the quality of the engineering.

Yet given Kawasaki’s background in heavy engineering, aircraft and shipbuilding perhaps this wasn’t too surprising. However, as newcomers to the motorcycle scene in the late Sixties this came as something of a revelation when the few sold by UK distributor Agrati reached the public. Once again a motorcycle from the other side of the world left the owners of C15s, B40s, Crusaders, 3TAs and the like speechless. And it wasn’t only the quality and performance that raised eyebrows. The styling of the A1/A7 series was vital and clean, proving to be a breath of fresh air when compared to the offerings of both its Japanese cohorts and our own home spun offerings.

With an outstanding lick of speed allied to surprisingly good fuel consumption you might reasonably have expected the bikes to evolve in the same way as Suzuki’s T20 eventually morphed into the seminal GT250. Sadly, however, after just five years both bikes were pensioned off in favour of the cheaper to produce S1/S2 triples that basked in the reflected glory of the H1. Cheaper than the equivalent triples now the A1/7 has to be one of the classic scene’s best secrets.